This Hadoop overview includes details about basic Hadoop components, core elements, and processing principles. Find out why Hadoop is one of the best options for big data management and processing.

‘Big data’ is a term that’s inseparable from the modern technological landscape, and so far we’ve extensively covered the importance of big data for business analytics, eCommerce personalization efforts, and other applications. Any high-performance IT infrastructure has to be able to support all the data streams generated by a variety of channels, from customer interactions online to IoT sensors that continuously monitor manufacturing and supply management processes. However, what we haven’t discussed in greater detail are the technologies that enable these big data capabilities.

The modern big data landscape is very robust. There are so many solutions and technologies competing for our data and the chance to store it, that it gets overwhelming. Luckily, there are tried and tested big data management solutions that have both an incredible track record and a mature ecosystem to boot.

One of them is Apache Hadoop, an open-source software framework that allows to distribute and process large amounts of data. In this article, we’ll provide a brief overview of the platform and the variety of its capabilities. This is the preferred platform for some of the largest enterprises on the planet, so you might want to get acquainted with its offerings.

Hadoop’s main role has always been centered on dealing with complex data. It’s perfect for high volumes of data, data that’s updated continuously, and data that is extremely varied in its composition and type. The platform does all of this by utilizing commodity hardware, which is the standard computing hardware that’s easily available for any enterprise. In short, it doesn’t need any specific hardware, like RAID arrays, to operate.

These capabilities allow you to distribute and process petabytes of data on many computers. And it’s extremely reliable, as even when you lose a piece of your commodity hardware, Hadoop uses a replica of that specific piece of data that was placed on a different machine. More on that later. Since all of this hardware is at your disposal, you also always have access to your data, and it’s not stored outside of your enterprise if you chose so. This setup might be both a security and reliability advantage.

All of these features also make it possible to use Hadoop’s highly reliable and replicable infrastructure to run distributed applications. This way you can create and verify code on a single machine and then distribute the same code for execution on other machines. This makes it possible to run applications that require heavy computational power without the actual need to invest in heavy-duty computational hardware. That’s why Hadoop is a favorite for many companies that have a predictive analytics pipeline requiring an incredible amount of processing power. This now can be easily distributed across the Hadoop infrastructure.

Hadoop is a favorite for many companies that have a predictive analytics pipeline requiring an incredible amount of processing power.

The Cornerstones of Hadoop Infrastructure

Hadoop is a complex system with many important technical elements. However, certain technologies within this amazing package are defining. Let’s take a quick look at them.

Hadoop Distributed File System (HDFS) is used to store data on Hadoop. Since the system is designed to handle large volumes of data for a variety of incredibly voluminous datasets, a typical HDFS file is measured in gigabytes. HDFS is platform-agnostic and can work with most operating systems.

The entire file system is spread through the hardware that actually stores the files (servers, machines, drives). This distributed system is called a Hadoop cluster, and each piece of hardware that’s incorporated into the cluster is called a node. 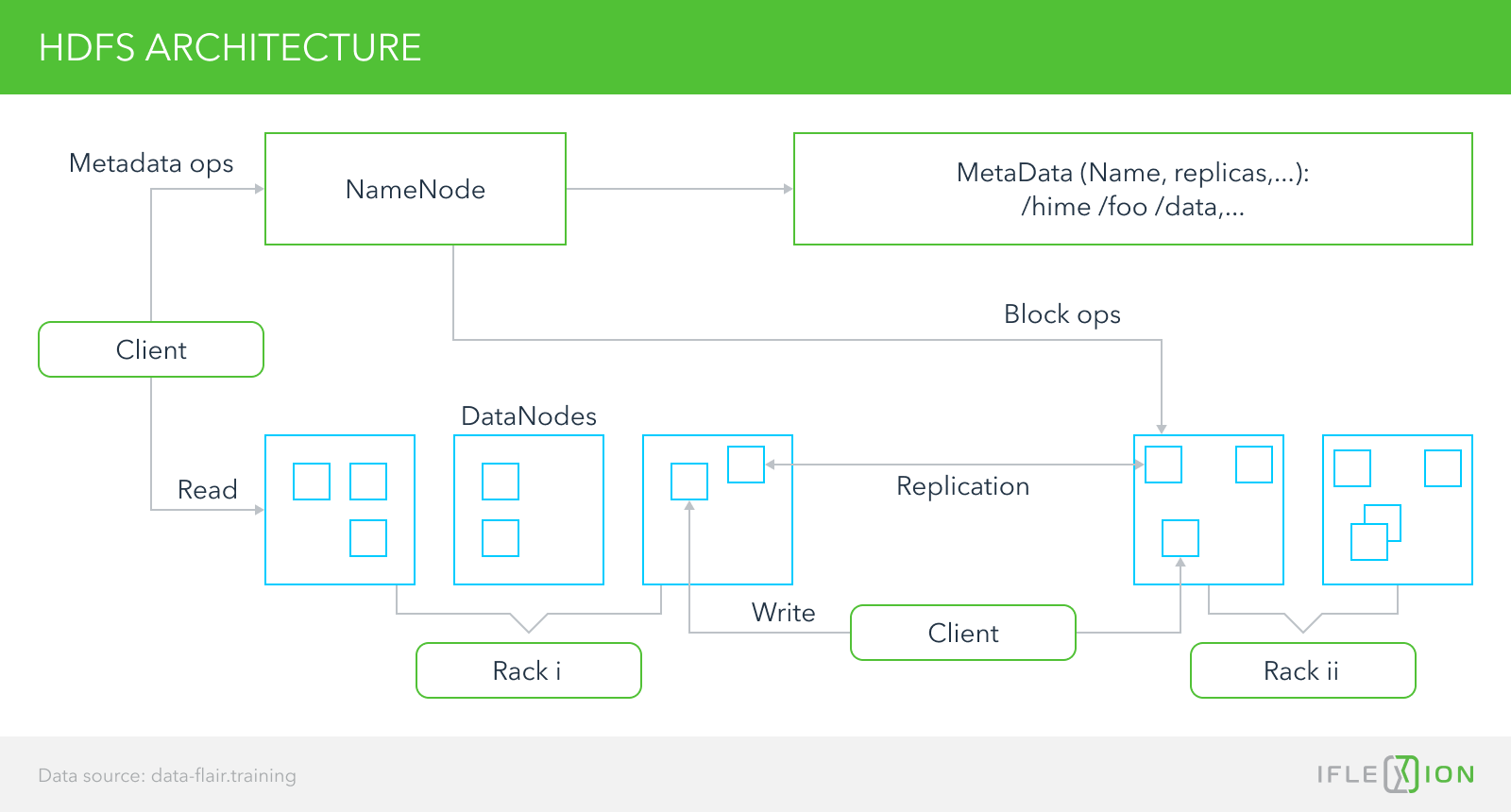 Here’s a simple analogy for you. You have four Excel spreadsheets and one person (one node) who needs to manually count the number of rows (execute the code). Let’s imagine that the sheets have a few rows, so it’ll only take a person 10 seconds to count the rows in all four spreadsheets. But what if you had two people (two nodes) and gave each person two of the four spreadsheets? It would take them only 5 minutes since the capacity has been effectively doubled. Now imagine this principle extrapolated onto petabytes of data that need to be processed for a distributed application.

This is the software framework that enables ‘Excel spreadsheet calculation’ that we described above. MapReduce provides execution routines that run on files stored in HDFS. It has two basic stages - Map and…you guessed it. Reduce. Returning to our spreadsheets example, the Map stage would be responsible for calculating the number of rows that are available on each node separately, distributing the process. And Reduce would take care of collecting the results from each node, combining the tally of rows into a single result and generating a single outcome for that distributed process.

It’s important to note that these processes are not dependent. So Reduce tasks can start adding those results (how many total rows are there across all Excel files), while some of the Map tasks could still be calculating the results for each spreadsheet. This architecture provides immense parallel processing capabilities, where files and processes are often not interdependent until it comes to generating the processing results. 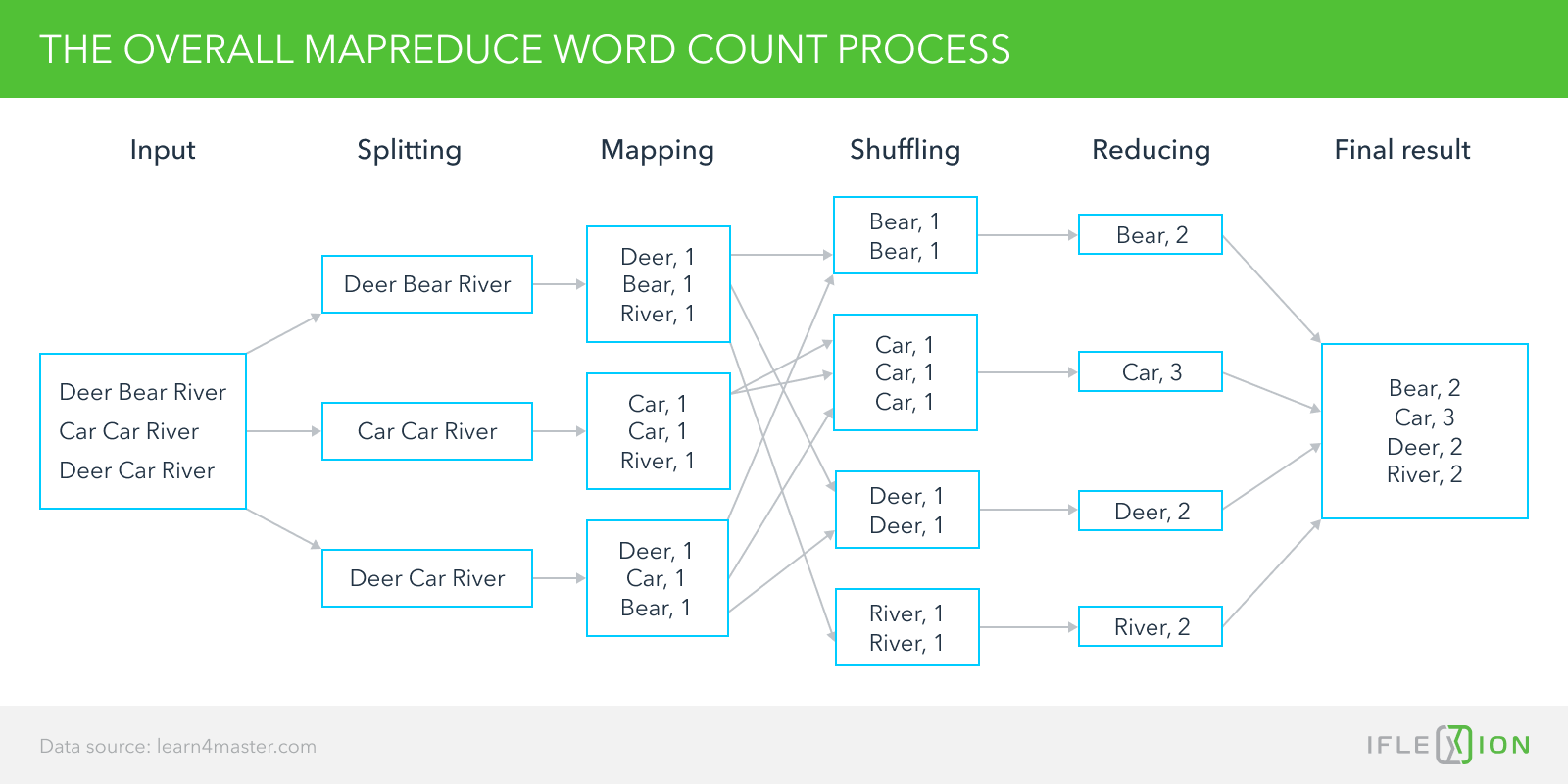 This is a set of basic components that support other Hadoop modules, such as the abstraction for the underlying file system. Additionally, you get the scripts and JAR files, without which Hadoop can’t be started. Hadoop Common is sometimes referred to as the core. It also contains the documentation and the source code, since the product is open-source.

This is the underlying framework that enables MapReduce processes. When you have millions of Map and Reduce operations running in parallel, YARN schedules jobs (operations) within the cluster and manages resources. YARN has a couple of primary duties - resources management (RM), and application management (AM). 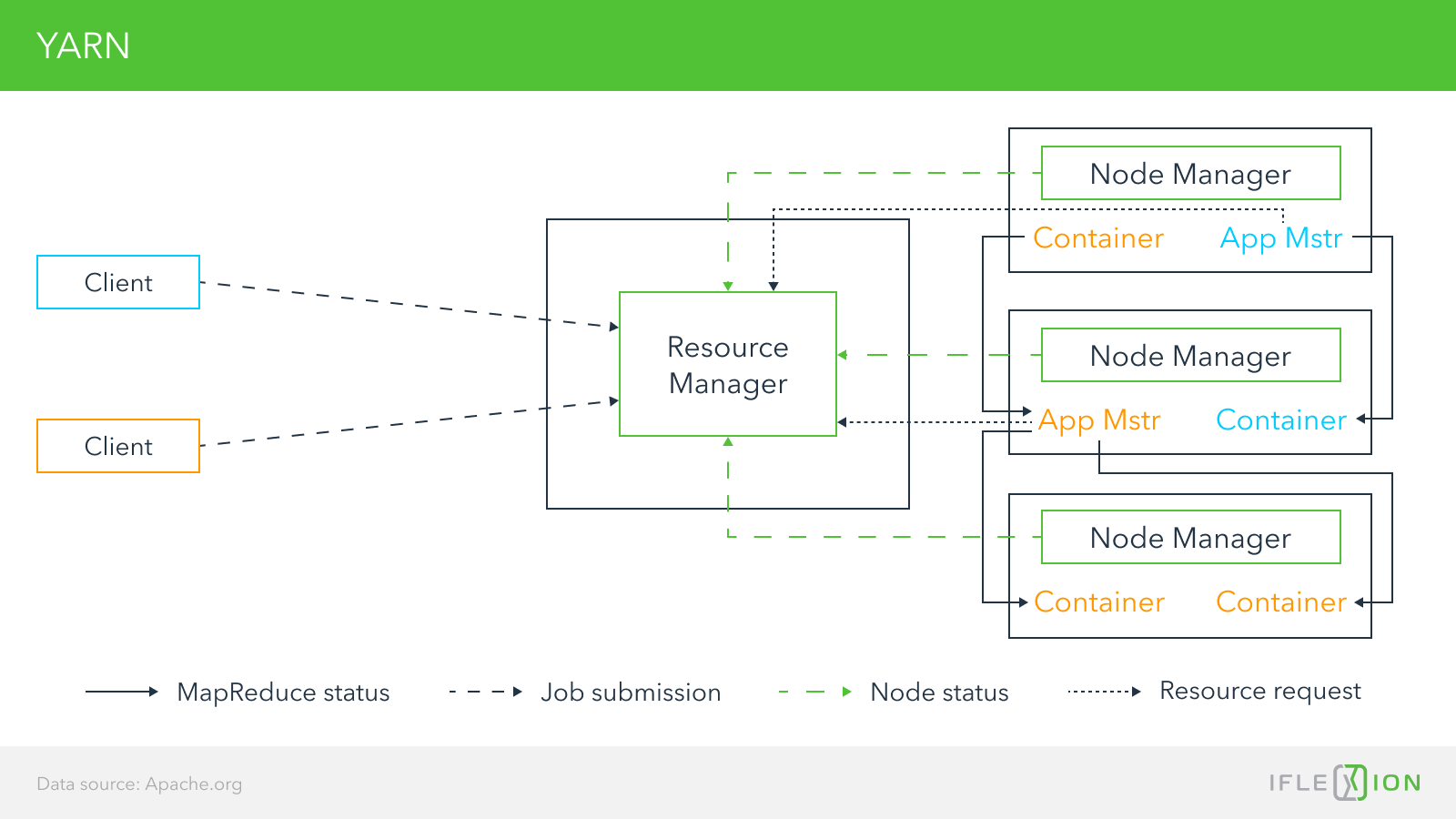 While the Resource Manager (RM) oversees resources for the entire system, there’s also a NodeManager (NM), which handles resources in each machine in the cluster. NM monitors CPU, memory, and bandwidth usage and communicates this data to the RM.

IBM, eBay, LinkedIn, RackSpace, Twitter, and many other tech giants are using Hadoop for their big data infrastructure.

A complete Hadoop overview is impossible without a look at its incredibly powerful ecosystem. It makes Hadoop the platform of choice for big data solutions across a wide variety of industries and enterprise verticals.

Apache Ambari allows businesses to manage their Hadoop clusters. Think of it as a resource management tool, where a single Hadoop cluster is similar to a node (a single machine within that cluster). It comes with powerful API support and includes an intuitive UI for cluster management.

Apache HBase is a database that’s built to manage incredibly large tables with billions of rows. It was designed to allow real-time access and comparatively fast read/write capabilities, while Hadoop itself was designed more for single-write, multiple-read database operations.

Mahout empowers data scientists and business analysts with tools necessary to run their own machine learning algorithms on top of Hadoop.

Spark is a highly versatile compute engine that has a variety of features that support ETL, machine learning, stream processing, and other functions. Since it uses RAM for computing, it’s faster than standalone Hadoop, but it does have limitations. For example, it doesn’t have independent file management capabilities.

There are plenty of other tools that were designed specifically to enrich Hadoop’s ecosystem, making it one of the most flexible big data storage and processing platforms. That’s why some of the biggest eCommerce enterprises on the planet utilize Hadoop. For example, IBM, eBay, LinkedIn, RackSpace, Twitter, and many other tech giants are using Hadoop for their big data infrastructure. Even Facebook runs a Hadoop cluster that includes thousands of machines and processes petabytes of data. According to a recent report co-authored by Tableau, one of the leading data visualization tools, Hadoop is steadily taking its place as one of the leading frameworks for machine learning and other AI enablement technologies. At the same time, it remains out of reach for certain business verticals and applications, given that many business users do prefer and have the training for SQL-based queries, familiar to a bigger audience. But Hadoop is transforming to accommodate those users too, with tools like Apache Impala.

Hadoop is an incredibly powerful platform for big data storage and processing. It’s hard to compress all of the knowledge about the platform without actually writing a book, so we tried to spell out the most important architectural and technological aspects of it. This Hadoop overview didn’t cover some specifics like data management, data formats, and processing peculiarities.

If you’re considering Hadoop as your next step into the realm of big data, make sure that you learn about all of these aspects. It is preferable to have an experienced Hadoop engineer onboard when you do that. There are plenty of various settings, resource management practices, and expertise that go into a fine-tuned Hadoop cluster. If you’re looking for an experienced team with a proven track record of Hadoop and other big data implementations - reach out to Iflexion. 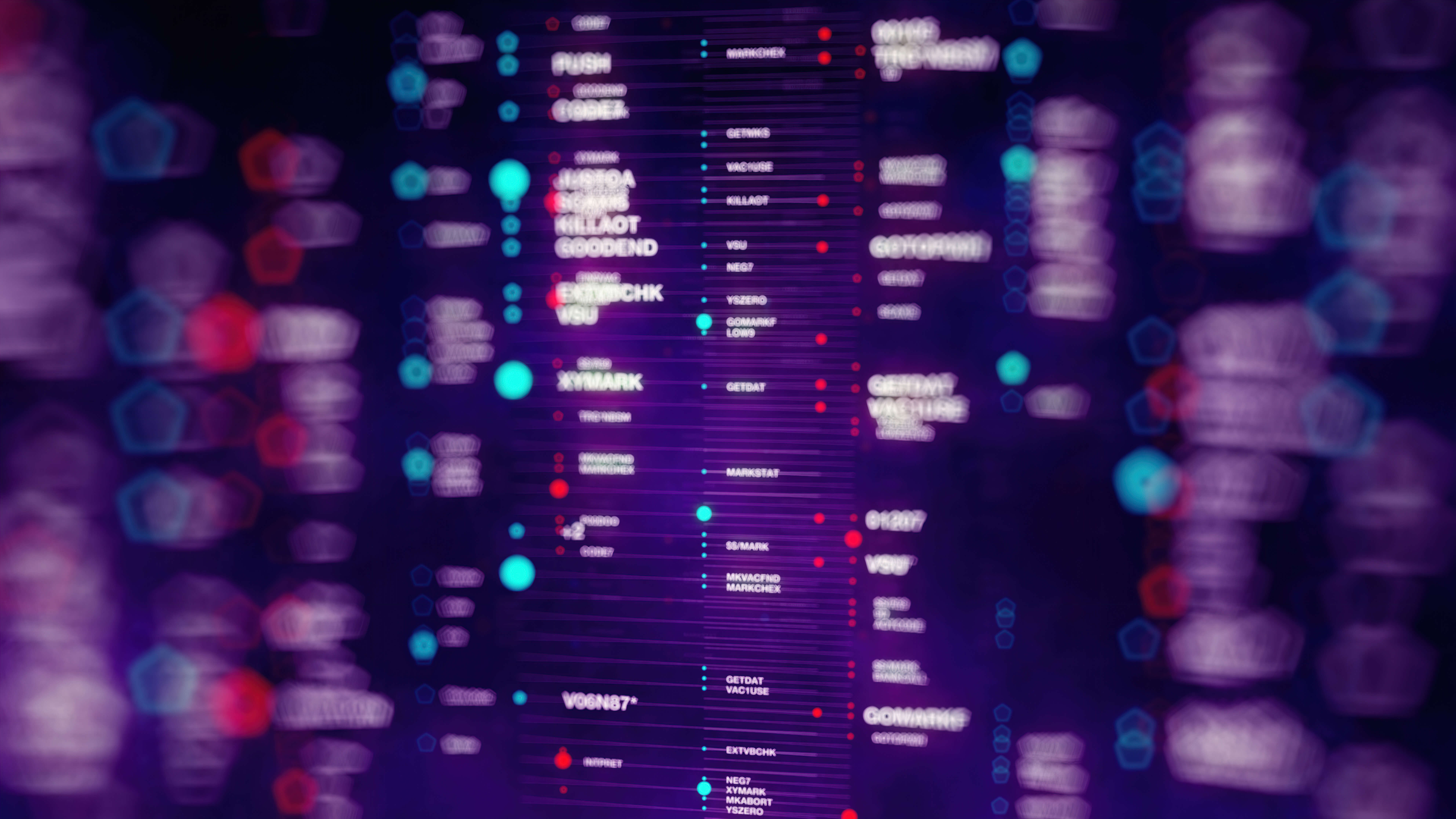 How Big Data is Transforming Ecommerce

What’s the next step? This is perhaps the most surprising transformation that Big Data has had on ecommerce: the move from online to offline.