Pros and Cons of React Native for Mobile App Development

Question: How do you eat an elephant?

Answer: The same way you build a cross-platform mobile enterprise app with React Native—one bite at a time.

This cryptic introduction will be explained a little later in this article, but first, you might like to know what React Native is and why it might be a contender to meet your company's mobile app development challenges.

React Native (RN) is an open-source framework developed by Facebook. It applies the React architecture to create native-like user interfaces for iOS, Android and UWP apps. If you've never explored the power of React Native for building cross-platform mobile apps, now might be the time to do so.

Facebook actively maintains and uses RN for building their own mobile apps. Social media giants they may be, but even Facebook isn’t invulnerable to the harmful impact of poor user-experience delivery. Therefore, the UI and UX of their apps must be well-elaborated. 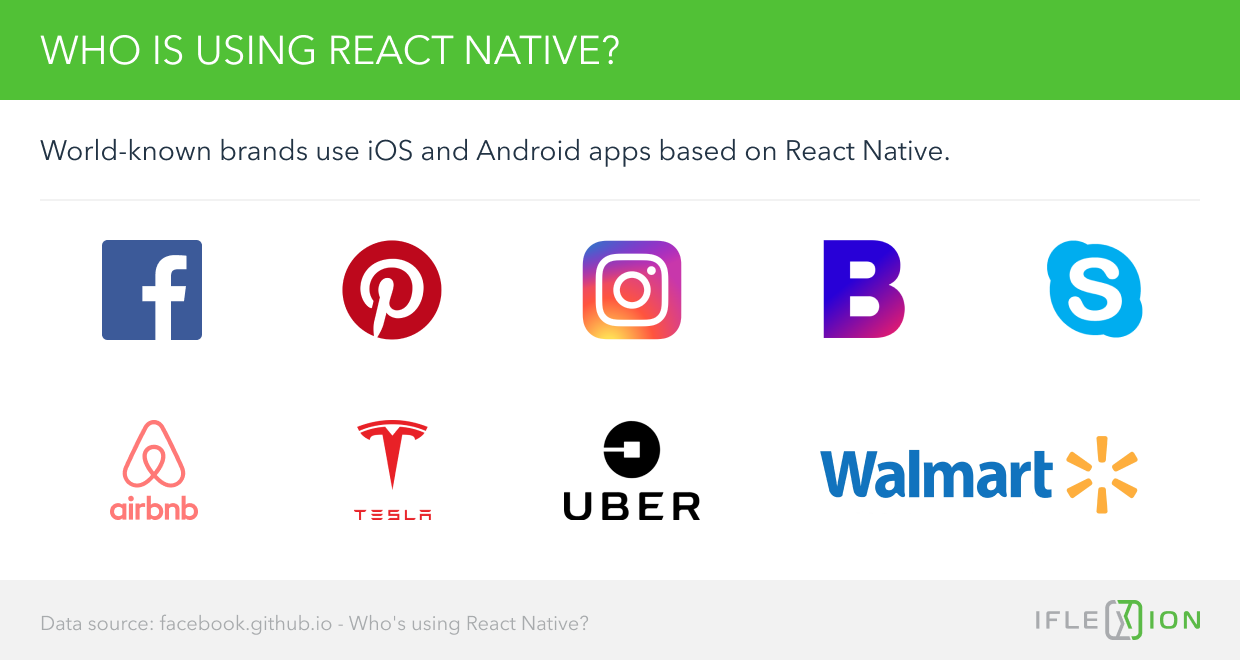 So when your company can access the technology that Facebook created and applied to their own mobile app development, it's probably unwise to overlook the opportunity, especially given that RN is open-source.

On closer examination, you may or may not find that React Native is the right tool to build your enterprise or consumer apps, but it would be almost criminal not to evaluate the pros and cons before selecting your platform.

Such social media giant as Facebook actively maintains and uses React Native for building their own apps.

So What About Eating the React Elephant?

Now let's return briefly to the subject of that metaphor, which in this case is the React Native mobile app development process. This process is very different to that of other cross-platform tools like the C#-based Xamarin or the Apache Cordova (PhoneGap) solution for creating hybrid apps.

With React Native, your developers write small pieces of code using JavaScript, which are ultimately rendered as native widgets in your Android and iOS apps. It's kind of an iterative process, enabling near-native mobile apps to be built up piece by piece—hence the elephant-dinner metaphor.

Like other cross-platform tools, React Native has its good and bad points. Naturally, these should be evaluated before you entrust your mobile software development to the platform—and to developers who advocate its use.

Let's begin by expanding slightly on React Native's use of components, or "building blocks." This can certainly be taken as a pro since it enables large and complex enterprise or consumer-grade apps to be built with increasing levels of abstraction. Meanwhile, each individual component remains manageable and concise, helping to make the development process clean and efficient.

This unique and advantageous approach to app development is merely one of many point-scoring features appealing to startups and Fortune 500 companies alike. Let's move on to take a look at some of the others.

When you add the fact that once written, most of the JavaScript code can be shared between iOS, Android, and web apps, you've got a cross-platform development tool that blows into the weeds most of the others— perhaps, with the exception of Microsoft Xamarin.

It's important to be aware that components don't yet exist for every functional need, so there will be occasions when solutions must be coded from scratch. However, the React community is already large and continuing to grow, and Facebook is very active in updating the product, so as time goes on, you can expect components to be provided for just about any purpose.

Cross-platform app development tools like React Native can save your company money as well as time. Aside from shortening the app development cycle (which in itself reduces cost), React Native allows JavaScript developers to create apps for multiple operating systems, with only a minimal amount of native code necessary.

These savings can be devalued though if app performance is not up to the same standards as those developed entirely with native code. This is a drawback of some cross-platform tools, especially in relation to animation, which can be laggy in some cross-platform apps. Fortunately, this is not a problem with React Native, as it's able to provide animation playback at 60 frames per second, even in apps that are calculation-intensive.

While development speed and cost will undoubtedly be among the most popular advantages for companies investing in React Native app development, there are a number of others which shouldn't be overlooked. For example:

As with any technology though, there are drawbacks as well as advantages to this relatively new development framework. Before your company commits to investment, it's vital to undertake a thorough evaluation of both pros and cons of React Native.

Actually, React Native doesn't have so many cons. Of course, app performance is not up to the standards of those created with platform-specific logic. There's also the fact that it's still a new development framework and that the number of ready-made components (one of the biggest React Native advantages) is quite small. 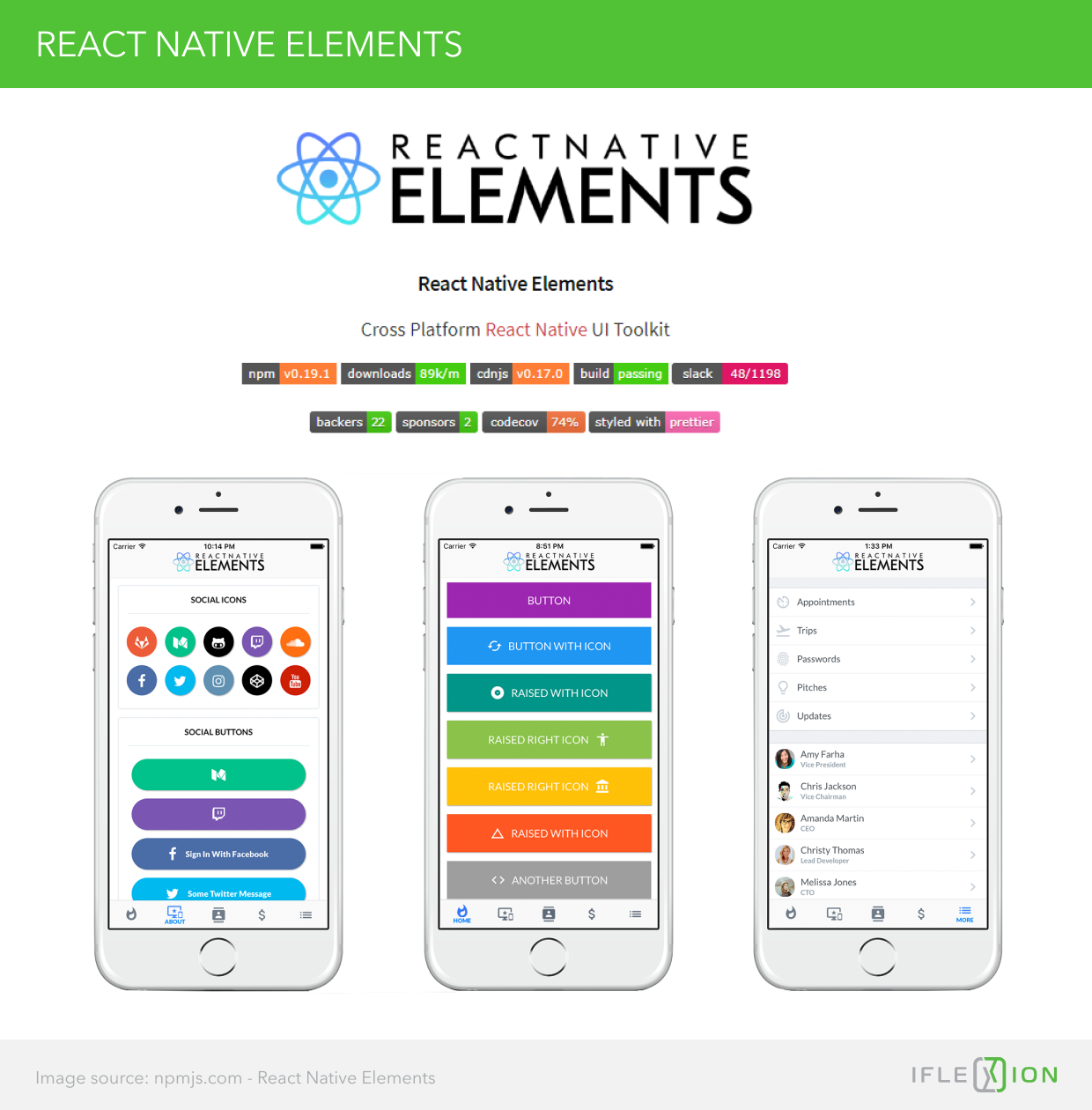 While third-party component libraries exist, choosing among them is a little like a lottery in terms of quality and reliability. Your developers always have the option to spend time correcting glitches in third-party components, but it will often be more realistic to create custom modules from scratch.

Earlier in this article, we mentioned a requirement for minimal native coding when developing apps with React Native. Minimal or not, there is an implied need for native development skills to get your app completed. This is something you will need to budget for, especially if your app will require access to device cameras and other onboard hardware.

Regardless of your view on the pros and cons of React Native, this framework is continually trending upward in the popularity stakes, especially among developers. In fact, within a programming category that inspires more dread than most among developers, React Native fares much better than Xamarin and Apache Cordova, the two leading cross-platform solutions. 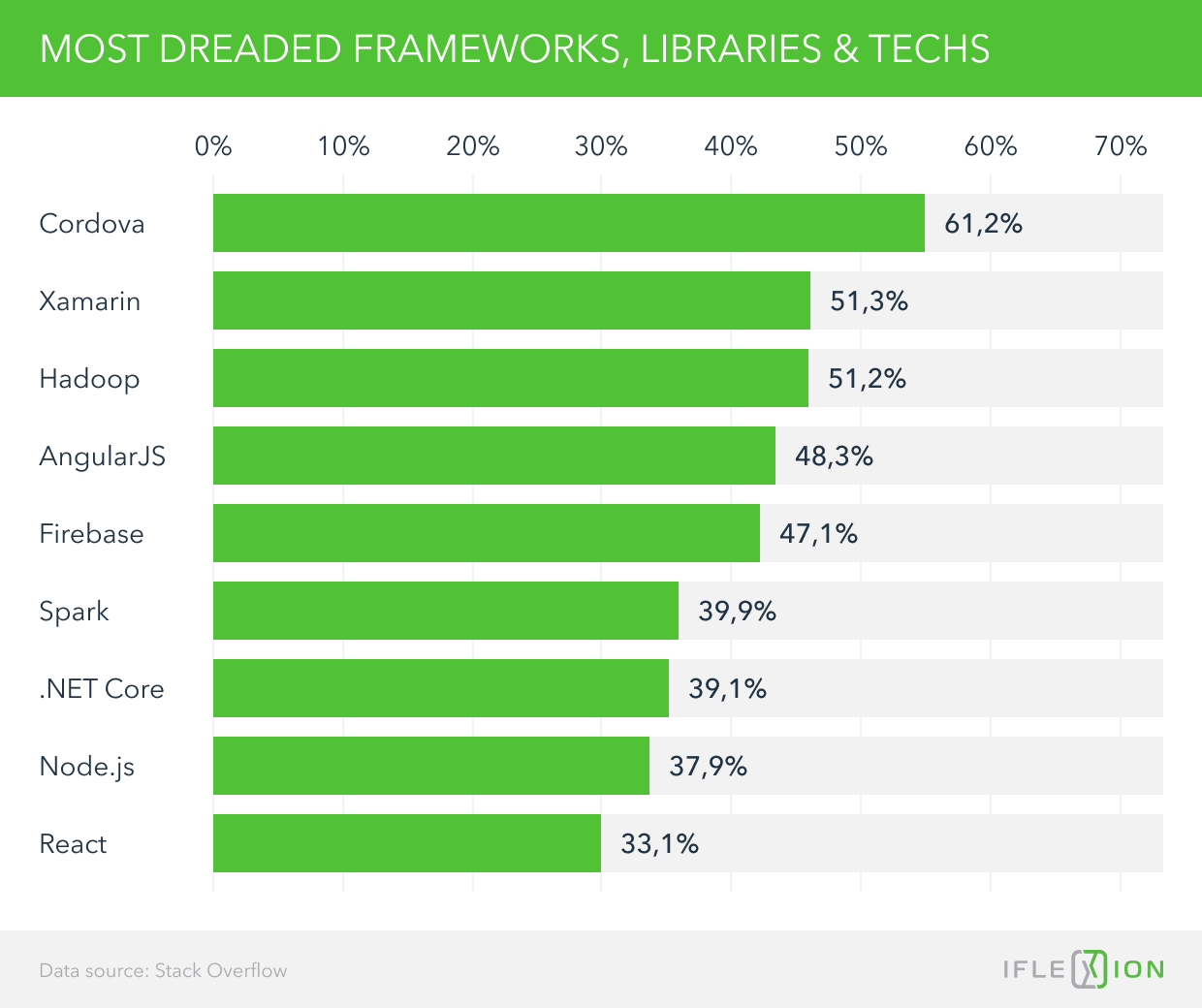 While being highlighted as "least dreaded" may be a dubious accolade, it certainly indicates that Facebook and the React Native community are doing something right. Of course, popular opinion shouldn't be a primary consideration in choosing a platform for developing your own apps, and hopefully, this overview will help you evaluate RN based on its technical merits.