The Pros and Cons of Artificial Intelligence: A Global Outlook

In this article, we explore the impact of AI on the global economy and what companies can do to balance out this technology’s pros and cons.

However, its all-permeating impact is not solely positive. AI is well on its way to displacing millions of workers, and can potentially have damaging effects on the economy by extending the gap between developed and developing countries. What will be the pros and cons of such an AI-powered global transformation? Most importantly, can we balance out the benefits and risks of AI on a wider scale?

Reimagine your business with AI.
Let’s discuss your project.
Get in touch

The Economic Impact of AI

According to PwC, AI will add $15.7 trillion to the global GDP by 2030. In the next decade, this economic growth will be mostly driven through increased productivity, personalization, and higher quality of products and services. 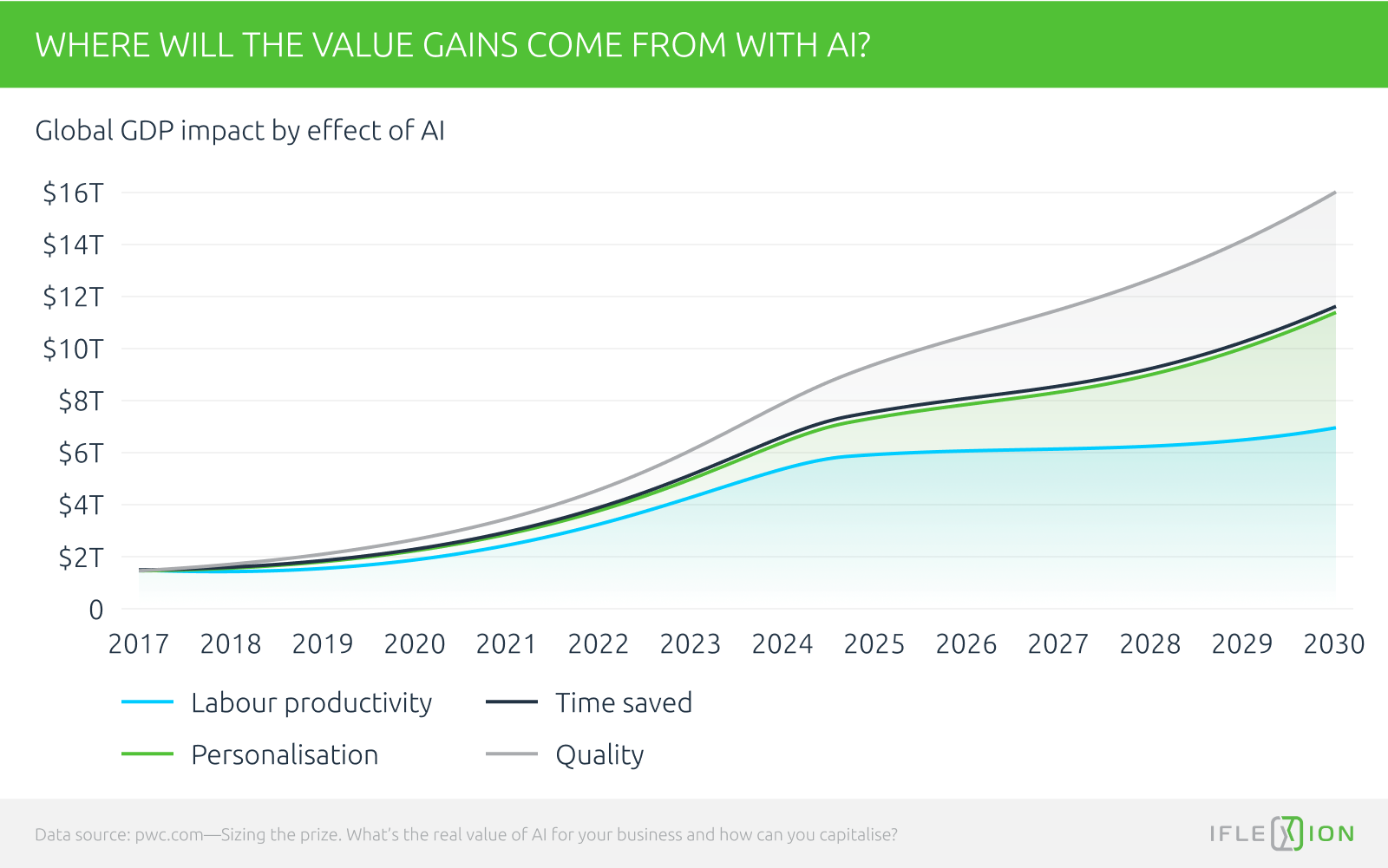 First, AI-enabled automation will fundamentally change industries like manufacturing and transportation. Increasing the adoption of robots and autonomous vehicles will allow performing tasks with improved accuracy and more efficiency. Routine work will likely become completely automated, enabling employees to spend their time on higher-value activities. The guesswork will be eliminated from equipment maintenance with the help of AI coupled with IoT, allowing for near-zero downtime. Overall, the combination of smart sensors, AR, VR, and AI will inevitably transform conventional manufacturing facilities into self-operating systems.

AI also enables organizations to quickly respond to customer needs and wants, which helps streamline upsell and cross-selling strategies and user engagement. As demand grows, this generates more customer interaction data, resulting in even a more granular fine-tuning of the algorithms at the core. This way AI puts companies in a never-ending loop of constant product enhancement, driving the economy forward.

Third, AI will most likely create a wider gap between industry giants and small companies, with AI-centric organizations having a disproportionate economic benefit. Those who are slow to adapt will inevitably fall behind. Essentially, the AI revolution favors enterprises operating at a massive scale over startups and SMBs. Experts argue that this can become a serious problem in the long term, as giants will use AI to widen the productivity gap even more. In 2015, OECD has already addressed this problem proposing the creation of policies regarding technology diffusion inequality.

Fourth, depending on AI readiness, the innovation foundation, human capital and market structures, the technology will also widen the gap between leading and lagging national economies. For example, developed countries have much more capacity to compensate for employee displacement caused by AI automation. Moreover, countries with lagging economies are usually much more reliant on labor-intensive industries like manufacturing, which are under the most risk of being automated. On top of that, economic powerhouses will most certainly become the global suppliers of AI, making it harder for smaller economies to compete. 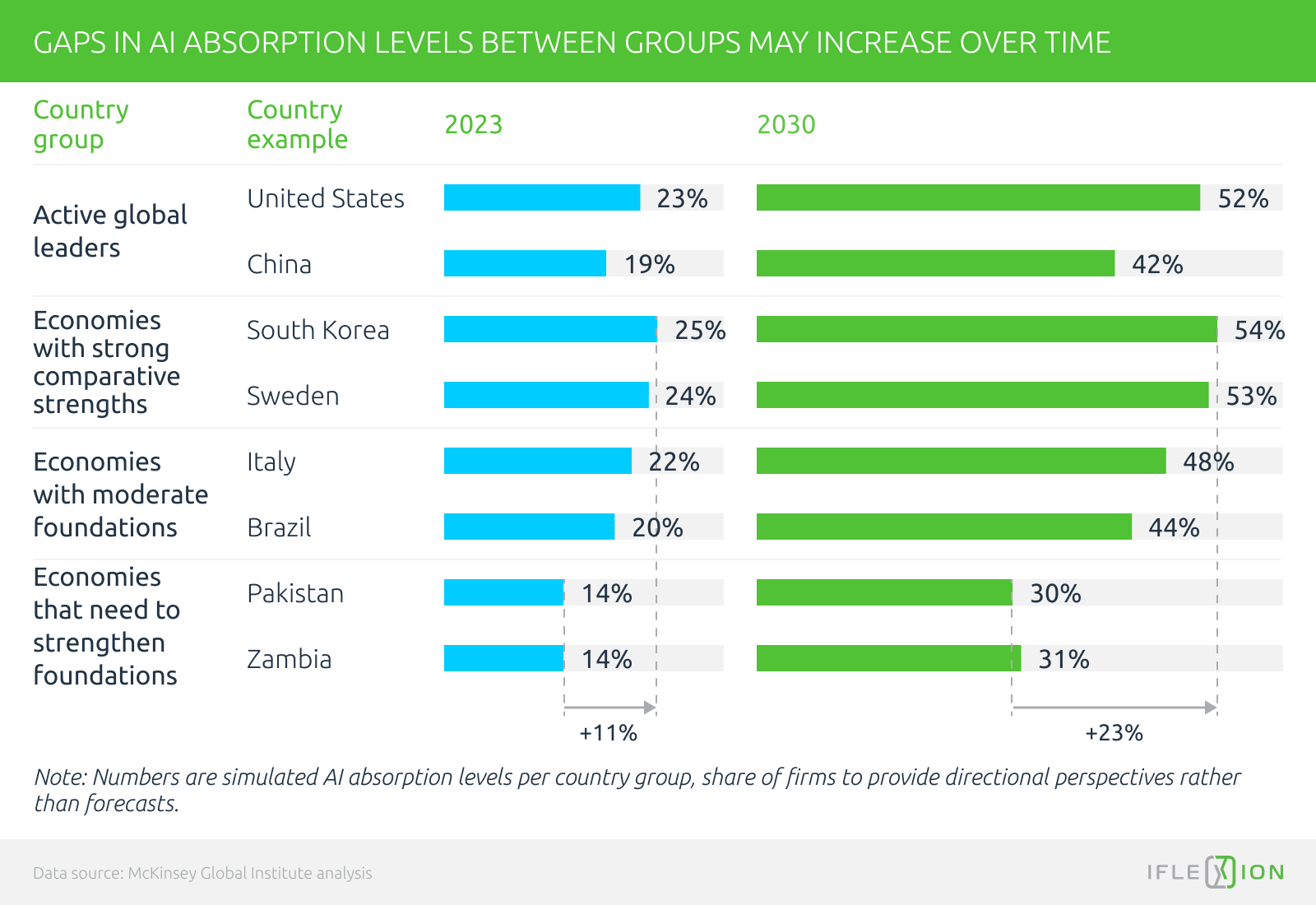 Fifth, with data now constantly expanding its role in the international exchange of goods and services, AI’s impact will only grow throughout the years. Aside from obvious enhancements like improved ad targeting in ecommerce, AI helps to overcome challenges associated with trade compliance and supply chain friction:

In general, we believe that the global enhancement of data flows is one of the most positive yet least mentioned contributions of AI. Essentially, the technology helps economic actors connect faster and more efficiently.

The Impact on Employment

The adoption of enterprise AI both creates and displaces jobs worldwide. Interestingly enough, predictions regarding the AI impact on global workforce range from overly optimistic to depressingly dystopian. One thing is certain — even though there are jobs that AI can’t replace, the job market will be changed by AI forever.

Unsurprisingly, AI will have the most impact on the jobs that come down to performing manual tasks, especially in the short term. On the other hand, highly skilled specialists who can quickly grasp AI concepts will be more demanded.

This will have a multilayered effect on the economy: 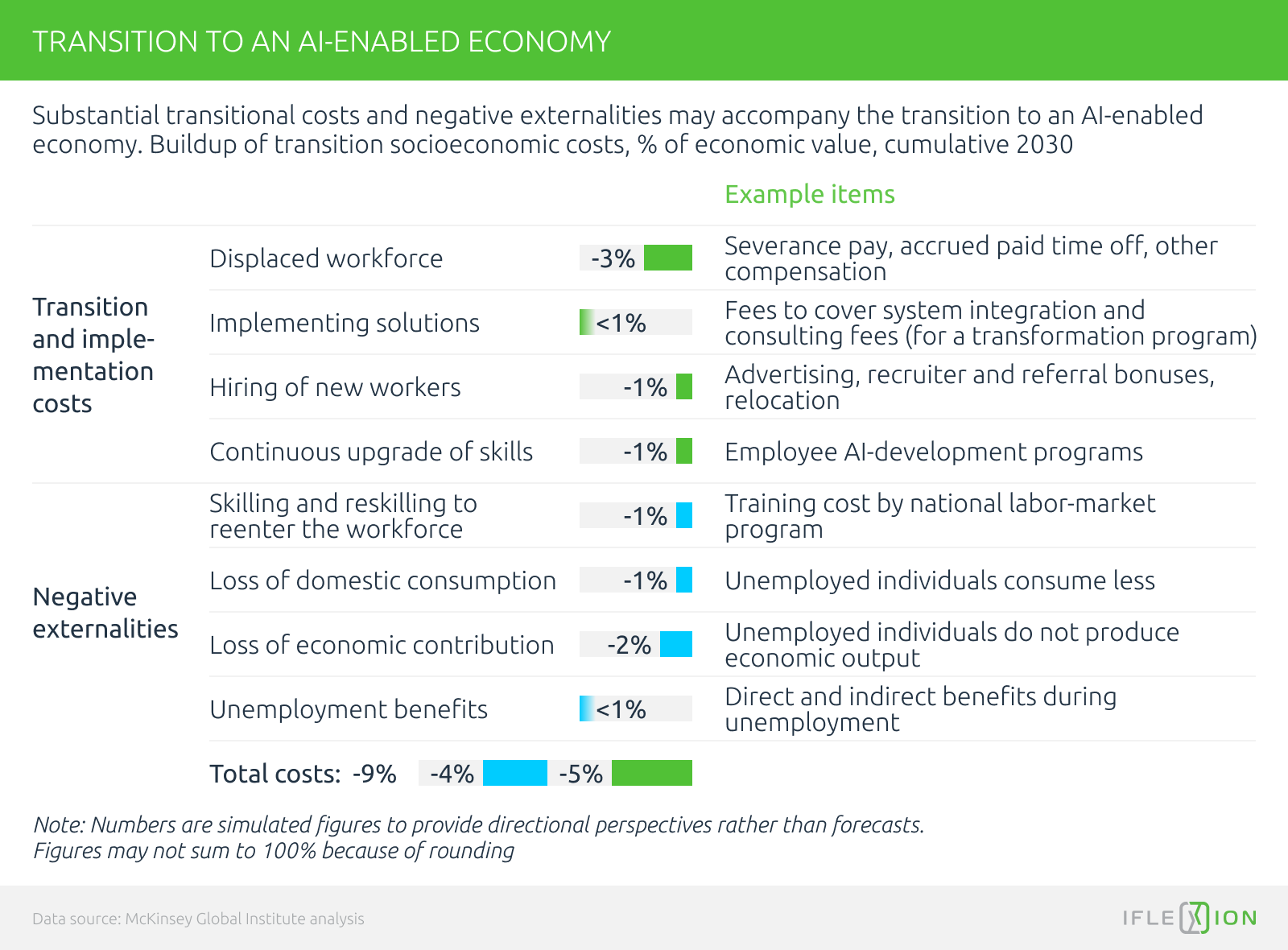 In any scenario, we believe that AI will only enhance human capital in the long run by creating new ways of training and augmenting workforce. The short-term negative side effects of job automation will be compensated by an increased economic growth and new job creation.

The short-term negative side effects of AI-enabled job automation will be compensated by an increased economic growth and new job creation in the future.

In a recent interview, former design ethicist at Google and co-founder of the Center for Humane Technology Tristan Harris discussed the negative impact of social media on our society. His key point was that the biggest social platforms use our attention for profit. Essentially, these companies have figured out our emotional vulnerabilities and exploit them to keep us engaged with their apps.

If you look at the Facebook feeds of two close friends sharing related interests, you would expect them to be at least somewhat similar. In reality, the algorithms choose feed content based on what will make us come back for more and keep scrolling, rather than what is truly useful for us.

This is why YouTube often recommends very polarizing, disturbing and conspiratorial content, which is very attractive to humans by nature. Famous YouTube scandals involving its recommendation system popularizing Holocaust denials and other misinformation are just the tip of the iceberg.

Those AI developers didn’t mean to promote any particular themes. Their main goal was to create a system that will make people spend more time on YouTube. Consequentially, AI has deciphered our inherent human weaknesses, which became the fuel of AI-driven content suggestion. Currently, it would require hundreds of thousands of moderators to regulate content promotion across popular media platforms. While this problem is yet to be recognized widely, it shows one of the most dangerous ethical threats posed by AI disruption.

AI’s most praised advantage is that it can achieve results in the most efficient way possible. Now imagine you’re an AI, a supercomputer without any consciousness and morale. You are tasked with making more profit than competitors. In most cases, getting rid of competitors will be the fastest and cheapest way to win the competition. See where we are getting at?

While the aforementioned example is definitely exaggerated, the combination of AI’s lack of morality and extreme goal-orientation has already proven to be dangerous. We are now trying to integrate AI into fundamental areas of our lives that operate not only by rules but also by common sense. For example, driverless cars can still interpret a plastic bottle as a serious collision threat, potentially causing traffic congestion. The application of AI in recruiting has met public outrage as unmonitored algorithms had been making unfair decisions based on race and gender.

Basically, it turns out that building an AI model is only half the job. Making AI adhere to core human principles and consider all the exceptions, ambiguities, contradictions, and long-term decision consequences is what really matters. And even then AI decisions can be questionable, as the practical problems of explaining black-box AI systems still persist. Paradoxically, the more responsibility we place on AI to make ‘good’ decisions, the more human interference and control are required for it to be safe. It’s hard to slap a ‘good’ or ‘bad’ label on AI in this sense. Ultimately, it’s our responsibility to make it ethical above all.

Making AI adhere to core human principles and consider all the exceptions, ambiguities, contradictions and long-term decision consequences is what really matters.

While AI has been increasingly embraced in the past decade, governments and companies are only starting to understand what AI really means for them. For certain, those with deeper pockets and more resources to embrace innovation are likely to go all in on AI adoption. Consequentially, industry giants will gain even more competitive advantages.

Global financial flows are already determined by digitization. Legacy technologies are now seamlessly blended with AI-powered models, enabling organizations to improve efficiency and their decision-making accuracy, along with other benefits that no other technology can offer.

As we move forward, we will be asked to meet the global challenge of transitioning from conventional economic mechanisms, which are mostly based on creating and trading physical goods and services, into a cyberworld where intangible technology dominates almost every imaginable facet of life.

For this change to go as smoothly as possible, it would require significant input from all economical players. From workers upskilling actively to organizations forming long-term AI strategies to governments introducing regulations regarding workforce dismissal — the time to act is now.

However, given that AI is still far from maturity, it is hard to predict how exactly this technological transformation will influence society on the whole. To balance out the benefits and risks of AI, we need a multilateral system that can improve the allocation of resources and spread the diffusion of this technology evenly across every interested country and industry.

Content type
Blog
Share:
Get the most out of AI with
Iflexion’s data scientists and engineers
Get a free quote
Related Articles