MR is Leaving AR in the Dust: So Say These Mixed Reality Examples

Move over augmented reality, mixed reality (MR) is coming. In this article, we share some mixed reality examples that highlight why this technology may outsell AR.

If you follow our blog, you’ll know that we have published quite a few articles covering AR and VR and their applications across a range of industries. However, today's digital advances are so fast that AR is already giving way to a more immersive merging of real and digital worlds.

The technology responsible for this shift is known as mixed reality (MR), and it is, in basic terms, bridging the gap between augmented and virtual reality.

Because MR requires the use of wearable gadgets, it is not yet as accessible as standard AR. However, headsets are readily available (though expensive), and MR is already beginning to penetrate some industries. Consumer adoption of MR is also on the rise, and in this article we will share some real-world commercial and recreational MR examples.

First, though, in case you are unfamiliar with the types of experiences that MR can provide, the following summary of MR environments should get you up to speed.

3 Ways of Changing the User Environment

For example, AR consultants might utilize MR to enhance the augmented reality experience, perhaps by creating interactive holographic apps to overlay onto the physical environment. Meanwhile, virtual reality engineers might create MR software that makes greater use of virtual environments, where the real world becomes a secondary element of the overall experience. 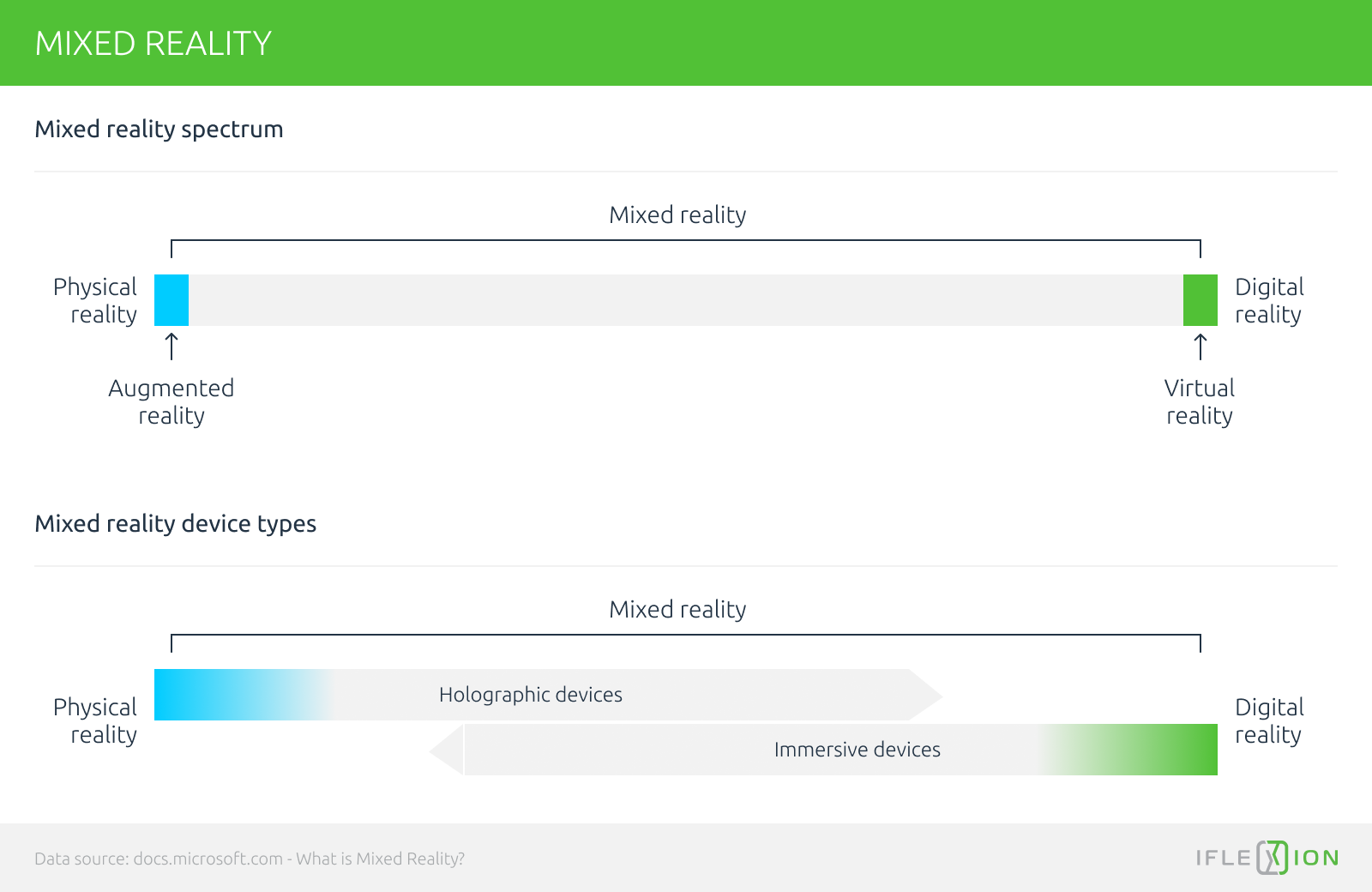 In essence, there are three levels of immersion, or environments, that MR developers can create when building an application. At the AR end of the spectrum, we find enhanced environments that anchor digital content to specific locations in the user's real world.

If you are using an enhanced-environment app with a device such as Microsoft’s Hololens headset, your real-world surroundings will form the central element of the experience. Then useful apps will be seemingly embedded in your surroundings, such as an MR shopping list overlaid onto the refrigerator door, or an MR television screen on your bedroom wall.

In the enhanced environment, you can manipulate and interact with the superimposed digital content to a far greater degree than in an augmented reality app.

Blended environments occupy the middle ground in the MR experience, comprised of a view of the user's physical surroundings, but with some of the objects or elements transformed digitally. This transformation might constitute a change of coloration or design, or the real-world object might become something else entirely. However, the general dimensions of the real-world objects would typically remain unchanged.

Immersive environments are the third level of MR. While they still reference the user’s real-world surroundings, a level of immersion can be created that borders on full-blown virtual reality.

In an immersive environment, the view in your headset might bear no obvious resemblance to the physical space and features around you, instead placing you in a completely unrelated scene. For example, your MR environment might be outdoors, while you are physically sitting on the couch in your living room.

Of course, MR apps don’t have to strictly adhere to these three levels. Developers can create MR experiences that exist anywhere along the spectrum of AR to VR. This high degree of creative flexibility may be essential to the MR market’s strong growth, which along with AR is set to become bigger than pure VR within the next few years, as illustrated in the chart below. 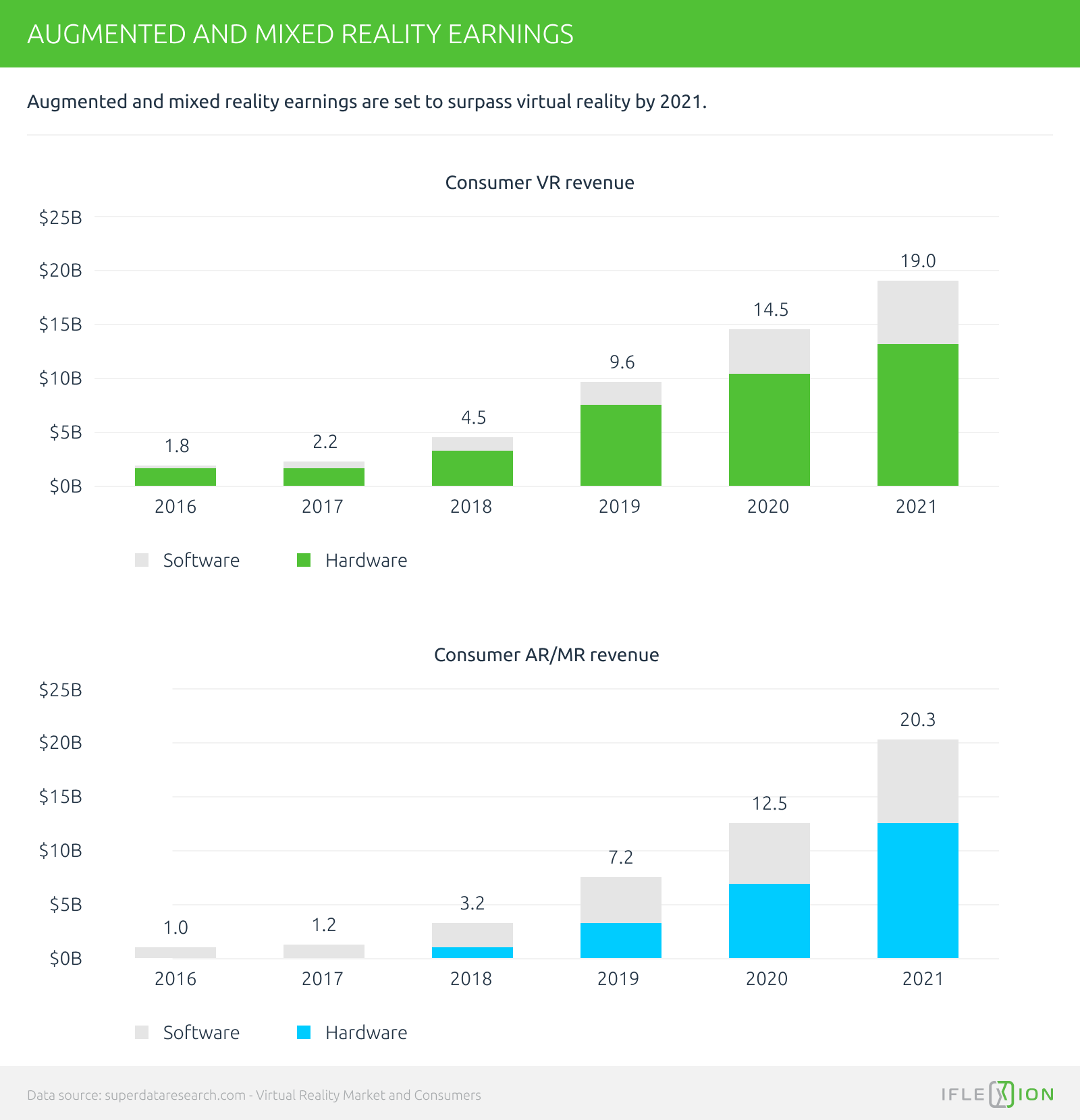 In order to understand the extent to which MR can be adapted for specific purposes, let’s look at some real-world applications for enhanced, blended, and immersive environment MR technologies.

Tap into immersiveness
with MR solutions from Iflexion
Get a quote

Indeed, this is evident in some branches of AR in manufacturing and medicine, as illustrated by the following examples of mixed reality.

MR on the Factory Floor

With the aid of Microsoft Hololens self-contained MR glasses, BAE factory workers can project 3D image-based systematic work instructions onto their workspace, and follow the digital guidance to construct power cells from scratch. BAE claims that this MR solution has cut the battery-building time by as much as 40%.

When medical students study anatomy, there is no substitute for the human cadaver. However, as a complement to working on embalmed bodies, there is currently no substitute for MR, as faculty members and students at Case Western Reserve University in Cleveland discovered back in 2015. The University has not looked back since it began collaborating with Microsoft to develop the teaching capabilities of the Hololens.

Today, students at Case Western are able to study the human anatomy using a life-sized, standing 3D image, which they can walk around and manipulate, dissect with hand gestures, and examine from unobstructed points of view, which is not always possible with cadavers, as sometimes one organ must be removed in order to view another.

Synchronization of the Hololens devices allows an entire class to see the same images at the same time, and remote users can join in from any location. Mark Griswald, a radiology professor at the university, describes the MR anatomy app as “life-changing.”

The following mixed reality examples highlight how blended environments are being used in product design and development to enhance or even supersede traditional concept creation methods.

Just as the medical field is using technology to complement cadavers, automobile designers are embracing MR to speed up the reimagining of current vehicle models and the development of concepts for new ones.

Ford was one of the first car manufacturers to embrace MR, which its engineers and designers now use in combination with traditional clay prototype designs and existing car models to create new designs more quickly and at a lower cost.

Ford uses Microsoft Hololens MR headsets and custom software to superimpose new design features onto their clay models and existing cars, enabling them to visualize how each change will look.

The beauty of this approach is that while physical modeling is still necessary, MR eliminates the need for new clay prototypes every time designers want to explore a change or design feature. Instead, a single clay prototype becomes the base for an infinite number of design ideas. Other car-makers, including Volvo, are also utilizing MR for vehicle design.

From Headsets to Hardhats: Mixed Reality in Construction Design

While creating a full-scale clay model of a car is possible, if costly, this kind of prototyping isn’t realistic for construction architects. Until recently, their standard technique has been to create scaled-down 3D building information models (BIMs).

Now MR systems allow architects, building inspectors, and construction workers to see a virtual version of a structure in its actual location at the 1:1 scale. With Hololens and BIM MR software, architects can even venture inside their creations to evaluate and assess internal elements, highlight issues, and visualize changes using voice commands or hand gestures.

Once a construction project moves into the building phase, MR superimposes BIMs onto the actual, physical structure, enabling identification of any discrepancies between the design and the building, and precise placement of specialized equipment when required.

Safety is paramount on construction sites, so MR hardware is incorporated into hardhats, protecting architects from injury while they use blended reality to check the construction quality and planning schedule in real time.

Blended environments are being used in the realms of product design and development to enhance or even supersede traditional methods of concept creation.

Of course, it would be wrong to publish an article about mixed reality examples without including some purely entertaining uses for the technology. Enhanced and blended environments are ideal for integrations between digital interactive content and the real world, such as the commercial examples of mixed reality covered so far. However, the more immersive levels of MR are perfect for entertainment apps, especially those created for gaming.

Even though MR headsets have yet to become affordable for consumers, a good range of MR games are already available to entertain those who can afford the hardware. The following examples have all impressed consumers who are willing to pay for early entry into the MR gaming arena.

Zombies seem ubiquitous in the world of digital gaming, even finding their way into games that aren’t primarily concerned with science fiction or horror. Arizona Sunshine, however, is unashamedly rooted in the post-apocalyptic domain of the undead, as is anyone who dares to don a headset and enter the immersive world crafted by the game’s creators.

This is a first-person shooter set in an expansive game world that offers a thrilling experience through its well-architected plot and highly detailed graphics. In fact, Arizona Sunshine was so well received after its launch in 2016 that it racked up $1.4 million in sales within one month, according to tech media site VentureBeat. By the end of 2017, VR news publication Road to VR estimated total sales to be close to $4.7 million.

A Windows Report review describes Form as most closely resembling lucid dreaming. Form is a puzzle-solving game taking place inside a virtual representation of the human mind. Designed to run on high-end gaming systems, Form takes place in an abstract virtual environment that's continuously morphing as the player journeys through it.

Although Form is said to be a little short and easy to complete in around one hour, it gained widespread praise for its enthralling storyline and immersive MR experience that’s among the best available.

Another first-person shooter, Space Pirate Trainer, could also be considered a workout tool, since players must make full use of the space available to them. The aerobic exercise comes courtesy of the game’s fast-paced and dynamic style of the gameplay.

The game’s premise is simple: waves of alien ships assault the player from every direction, and they must destroy as many as possible using an arsenal of virtual firepower.

Praised by critics and players alike, Space Pirate Trainer sold around 160,000 copies by the end of 2017, as estimated by Road to VR, and received wide acclaim as one of the year’s best-selling VR titles on Valve’s Steam distribution platform.

An excellent range of MR games is already available for those who can afford the expensive MR hardware.

Mixed Reality May Soon Be Everywhere

Aside from the mixed reality examples above, enhanced, blended and immersive environment apps are undergoing experimentation and testing in many other sectors of industry and commerce. For example, the market for educational MR is already growing steadily, with research company Technavio projecting a compound annual growth rate of 59% by 2022.

MR interest is strengthening in many other sectors too. For example, AR company DAQRI found this out when it sought enterprise input and feedback for its MR headset and productivity software in 2017. More than 100 companies from multiple industries jumped at the chance to test the product.

Mobile AR is beginning to look like just a stepping-stone to something much more important. So it might be time to start thinking about MR’s potential uses for your industry—and even more importantly, how you might benefit from using it within your organization.

Mobile AR is beginning to look like just a stepping stone to something much more important. It might be a good time to think about MR and its potential uses for your industry.