R vs Python for Data Science and Visualization

We look at the capabilities of R vs Python in data science applications across a range of essential characteristics.

Python and R are frequently pitted against each other as if one or the other might eventually become the Betamax1 of programming languages for data science analysis.

If economy of scale and the growth of market share were the only criteria, we could award Python as the winner without further consideration. However, comparing R and Python in this way may be a false equivalency that's compounded by the impact of the GPU-accelerated machine learning revolution of the last ten years on both and by the evolving confluence between data science and machine learning. Neither framing the languages' adherents as 'rivals' nor the arguable unique strengths of each account for the interoperability that can be achieved between them.

In this article we'll consider what Python and R currently have to offer for enterprise deep neural networks and data science consulting, and how emerging trends may affect their uptake.

Book our data science consultants
to get it right for your project.
Reach out

R evolved in the mid-1990s from S2, a statistical programming language popular in the 1980s, as statistical analysis became a driving feature of the new business computing revolution.

Among its core strengths, R provides a very high-quality and configurable graphing output even on a base install. 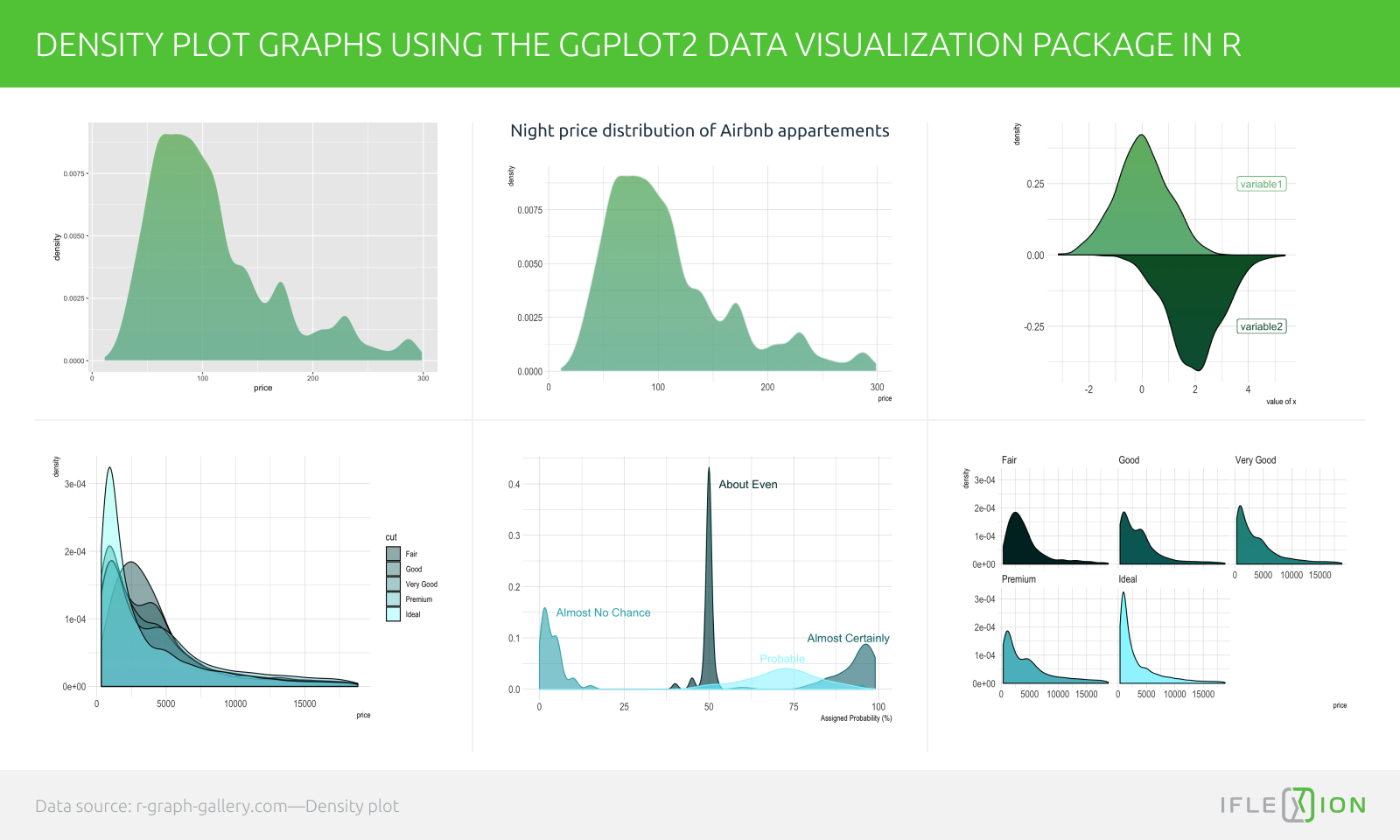 R is an extensible language, with more than 20,000 available user-contributed extensions3. Areas covered include finance, genetics, econometrics, medical imaging, machine learning, psychometrics and social sciences, among many others4. Packages are archived and distributed from the Comprehensive R Archive Network (CRAN)5.

In 2010, the release of the RStudio integrated development environment (IDE) gave CLI-based R a more user-friendly but powerful interface, while the curated Tidyverse collection of R packages for data science became a standard environment for selecting and using the most powerful and popular adjuncts to R.

Python is an interpreted and dynamically-typed language developed from the ABC language in the late 1980s. Like R, Python is highly extensible, with its popularity driven by the extraordinary range of additional functionality from over 137,000 available libraries6.

Python's ability to create native and cohesive frameworks has driven it to the heart of the machine learning revolution over the last 15 years. Pivotal AI libraries such as TensorFlow, Pandas, Scikit-learn, and NumPy are either written in Python or support it as a priority over other languages, such as C.

In the same period, a confluence was forming between machine learning and data science, as the power of high-scale deep neural networks transformed a culture of 'local' and limited analysis into the prospect of developing an industrialized AI-driven panopticon of statistical insight.

Thus, over the last decade, Python's strengths as an analysis platform have met up with its vanguard position in machine learning development, recently pushing the language to the first position (57%) on GitHub's survey of machine learning languages, with rival R lagging in eighth place7.

Besides those mentioned above, popular Python data science libraries include PyTorch and Keras, as well as staples such as Matplotlib, Seaborn, Pydot (for the C-written GraphViz data visualization library), SciPy, and the Beautiful Soup HTML parser for web-scraping.

The Python Package Index (PyPi) is the central library repository and equivalent to R's CRAN. It's a crowded place, with a wider scope than data science, and therefore PyForest offers a filter for the automatic import of PyPi data science libraries.

R or Python for data science?


The rpy2 repository provides full-featured access to the entire R functionality from within Python, translating R's objects into Python functions, with transparent conversion to Pandas and NumPy data structures.


Reticulate is the most popular method to access Python functionality from within R. Reticulate inserts a Python session directly within an R session, allowing calls to Python by various methods:

Additionally, the RTorch repository provides a wrapper to PyTorch, effectively combining all the capabilities of each language.

Machine Learning and Statistical Libraries Across R and Python

Both R and Python offer a comprehensive array of importable or native libraries covering use cases for data science analysis, from the most popular functions to the most arcane. Since interoperability between the two languages is well-facilitated (see above), there is no appreciable gap in functionality. Some libraries, such as XGBoost, are equally available to either language.

In general, Python relies on the machine learning library Scikit-learn for the majority of data science-related functionality, while CRAN is the equivalent external source for R. Since R was created with statistical analysis in mind, it features a slightly higher range of related native functions. 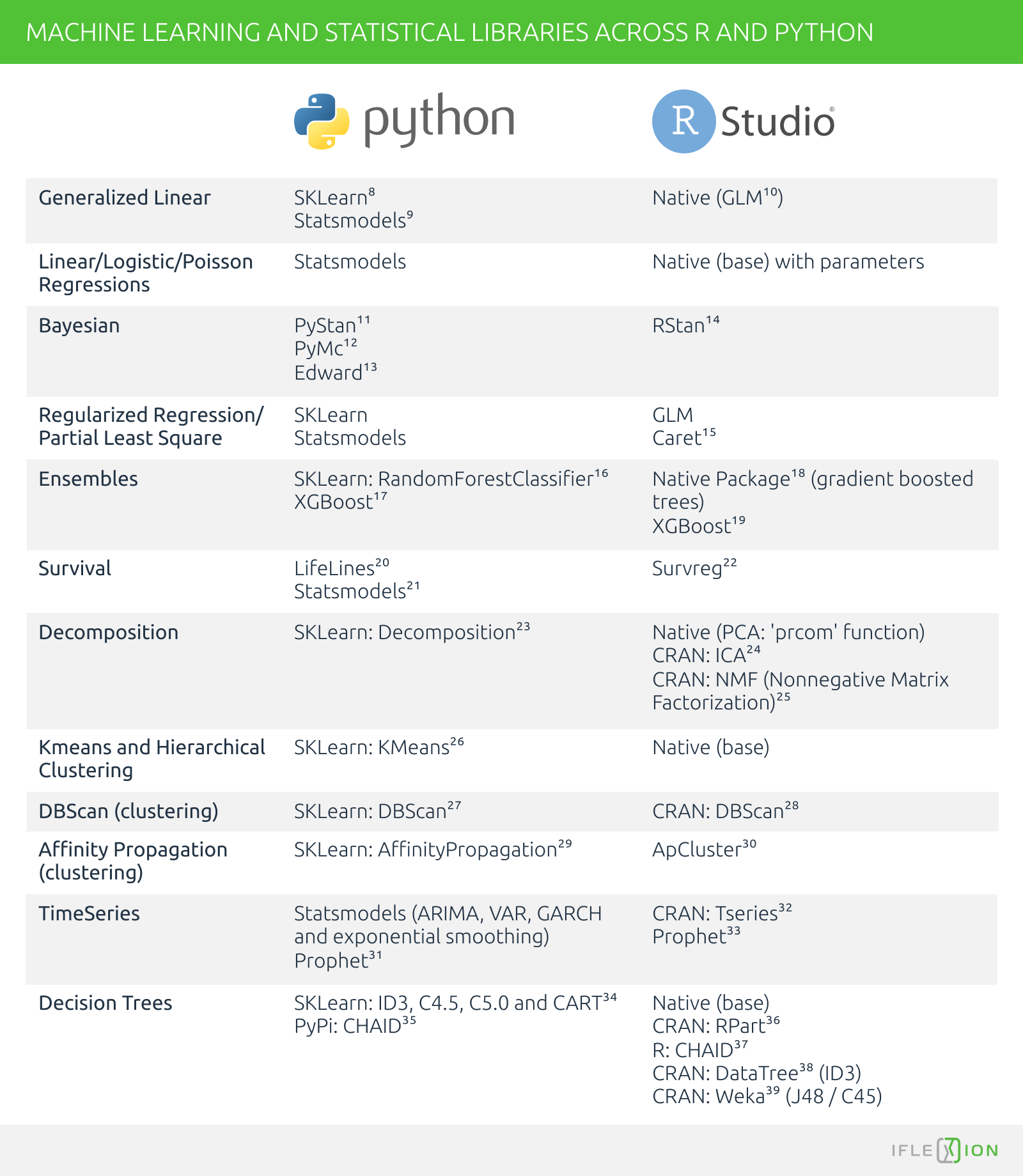 Though R's native Graphics package provides 100 functions for generating histograms, scatterplots, and boxplots, the far more sophisticated capabilities of the ggplot240 package have arguably been the driver for uptake.

Ggplot2 provides a layered and logical sequential approach to data visualization development, with aesthetic components chosen and configured after essential elements such as axes and data positioning are established.

At the time of writing there are 80 registered extensions for ggplot241, offering functionality as diverse as spellchecking, theme additions, HTML embedding, facility for survival curves and alluvial diagrams, time series visualizations, partial rasterizations and visualization of IP addresses and networks.

In addition to a versatile range of styles and configurations, graphs can be nested for single implementation into a document or interface: 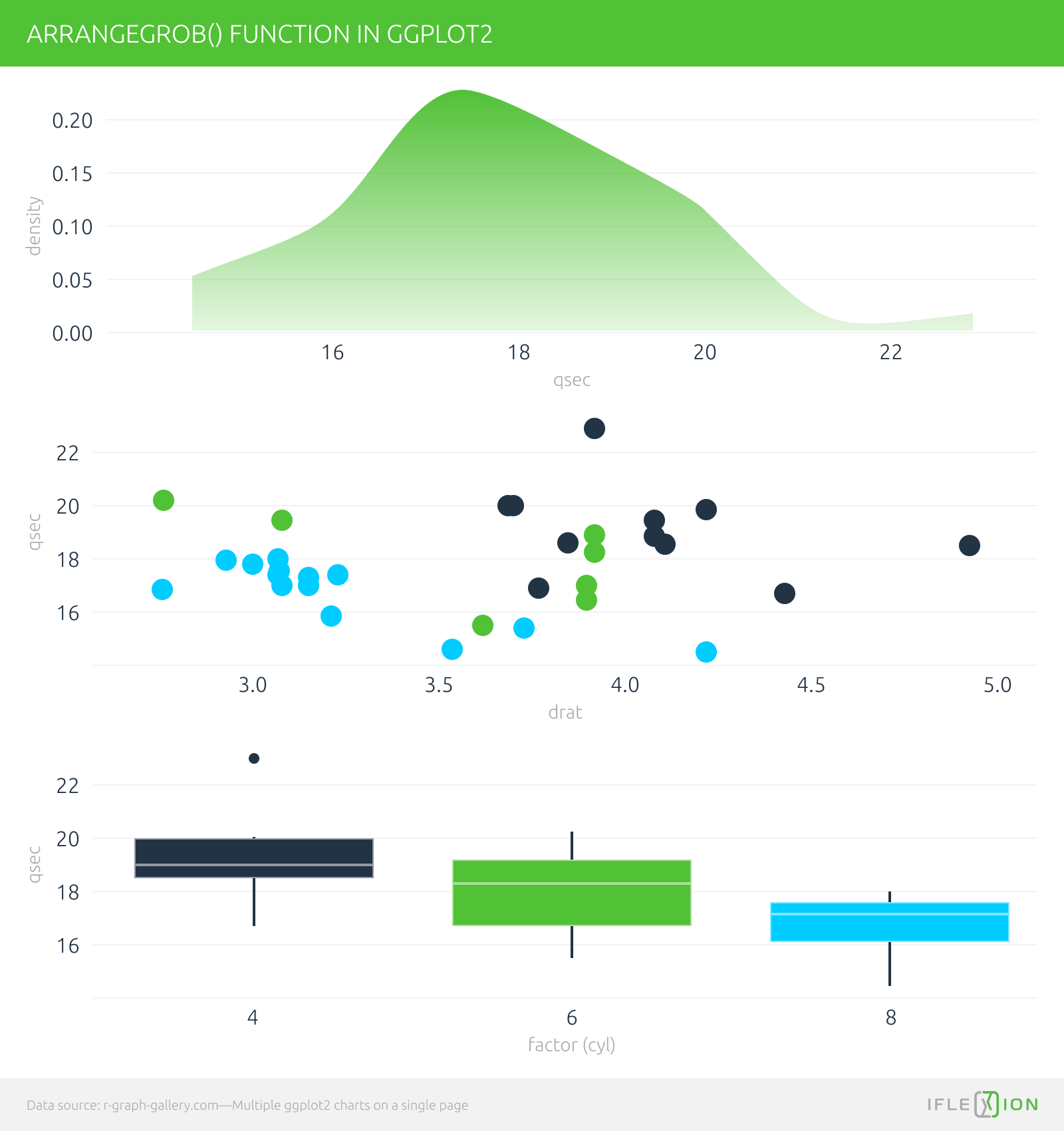 The gganimate library can also compile sequential or time data into elegant animations, created as GIF files or passed to the FFMPEG renderer for video output.

In keeping with its generalized scope as an all-purpose programming language, Python defers to external libraries such as Matplotlib to provide an equivalent graphing functionality to that of R.

Matplotlib is an open-source Python derivation of the proprietary MATLAB programming environment. Similar to R's ggplot2 extensions repository (see above), it is greatly enhanced by a comprehensive range of third-party mapping toolkits42. 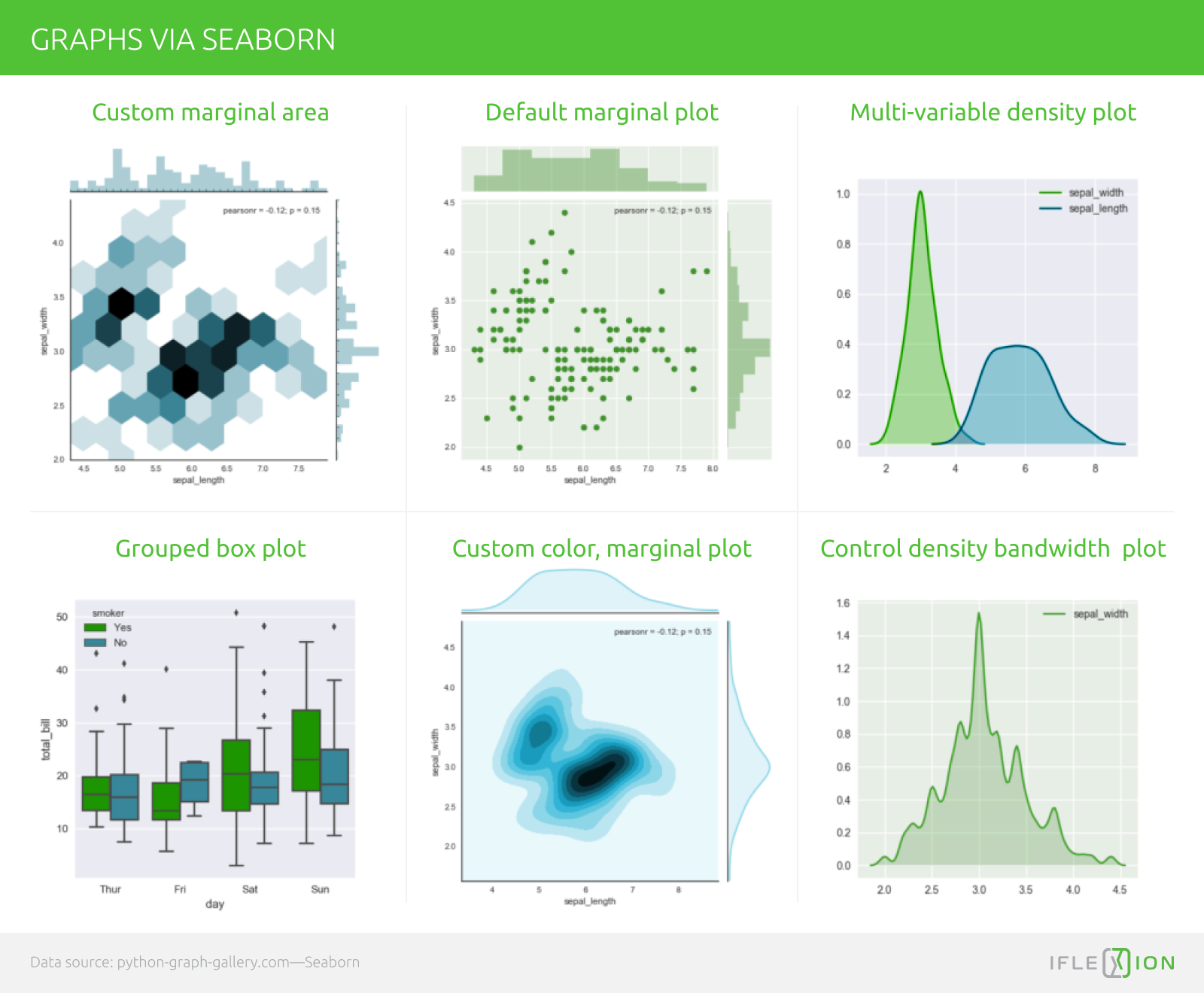 However, arguably the most important additions are the ggplot library, which ports the entire graphics-driven philosophy and utility of R's ggplot2 to native Python, and Seaborn, which not only facilitates Trellis graphs (see below), but provides a super-layer of statistical graphics capability to Matplotlib via a high-level API that's easier to use and more up-to-date. 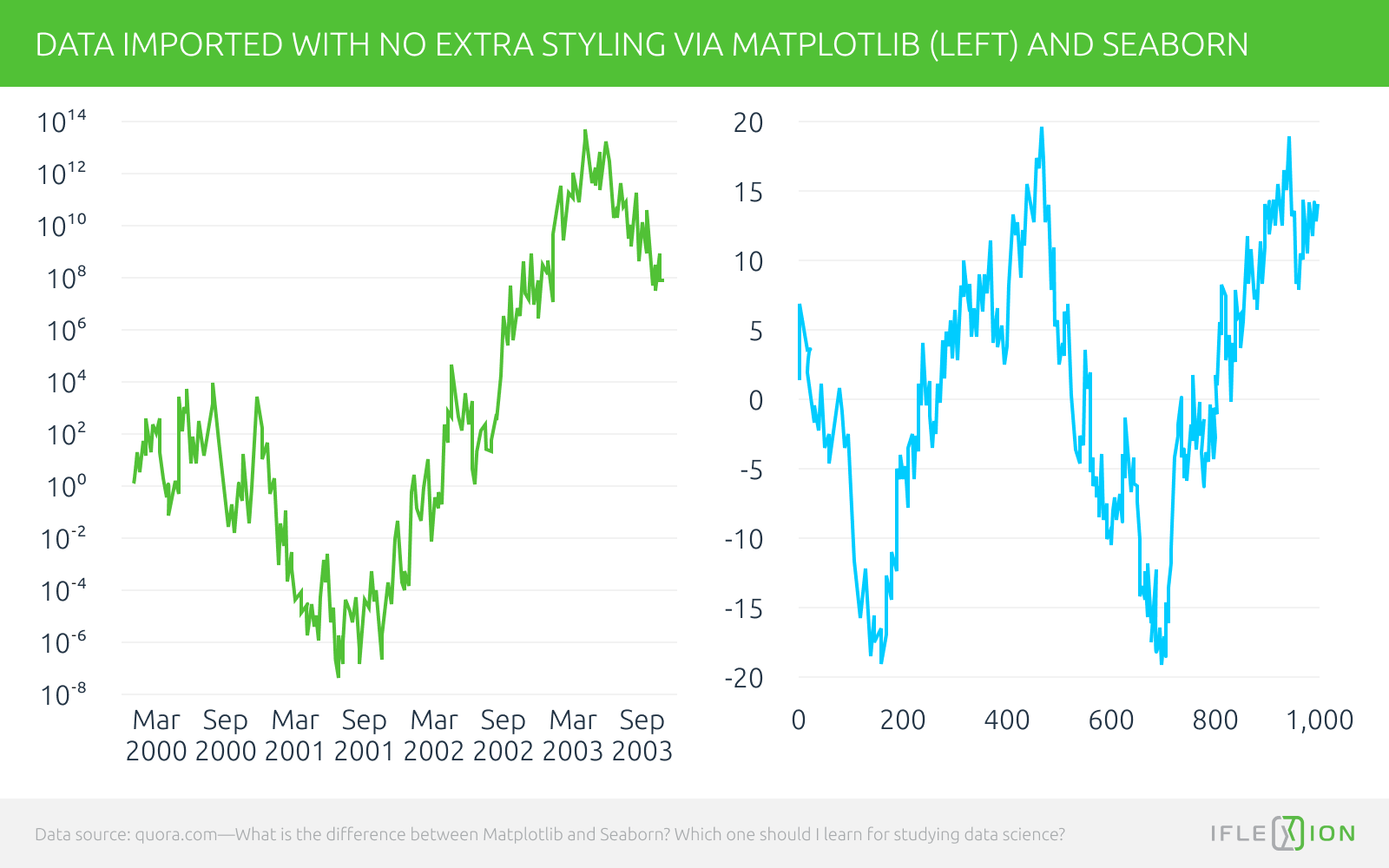 Seaborn offers greater control over color use in graphs, essential in differentiating data streams, as well as offering additional plot types, such as the Violin plot: 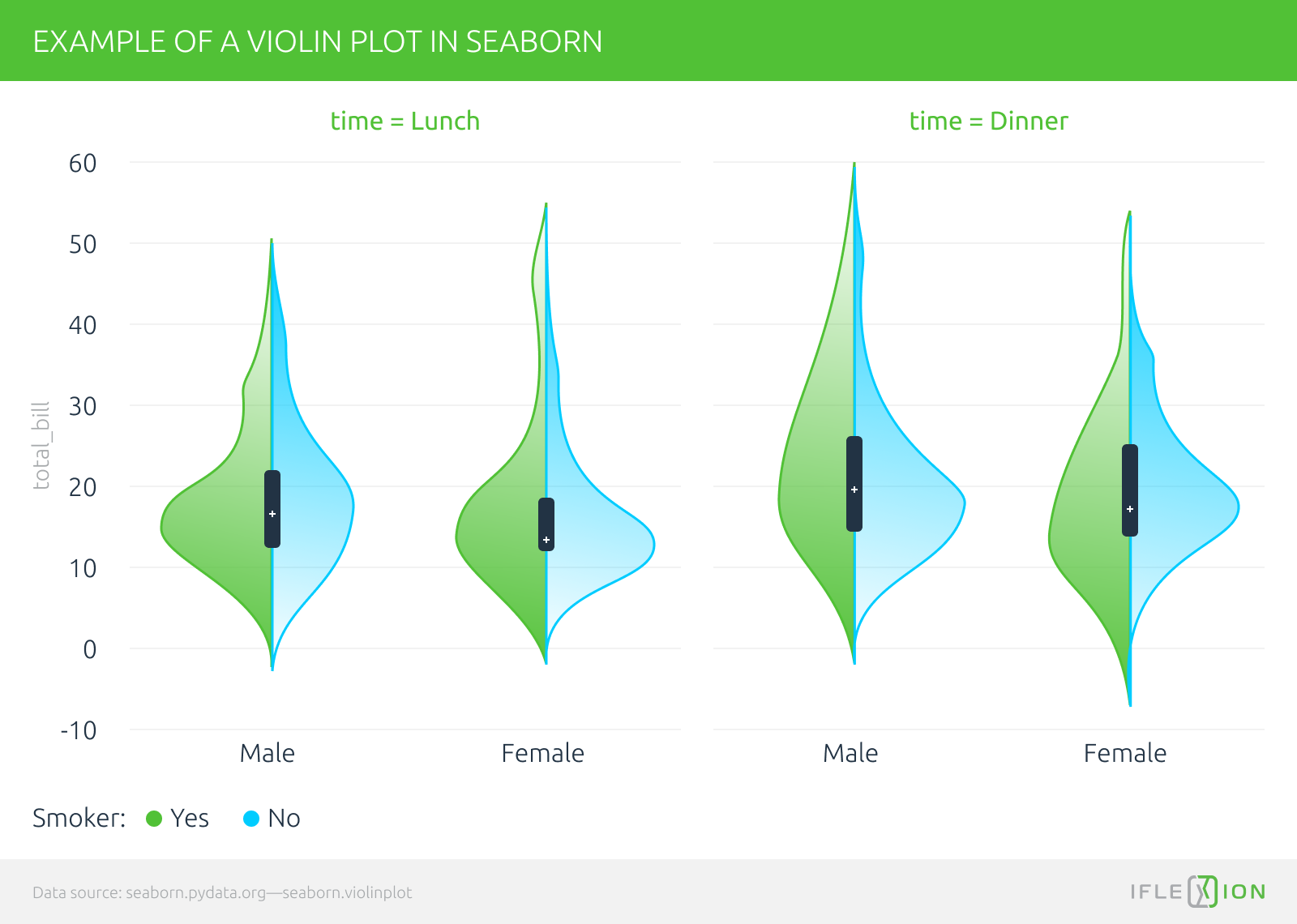 Furthermore, Seaborn's pairplot() function, among others, enables at-a-glance exploration of data prior to more sophisticated choices for graph output, and with less code than is necessary in R43: 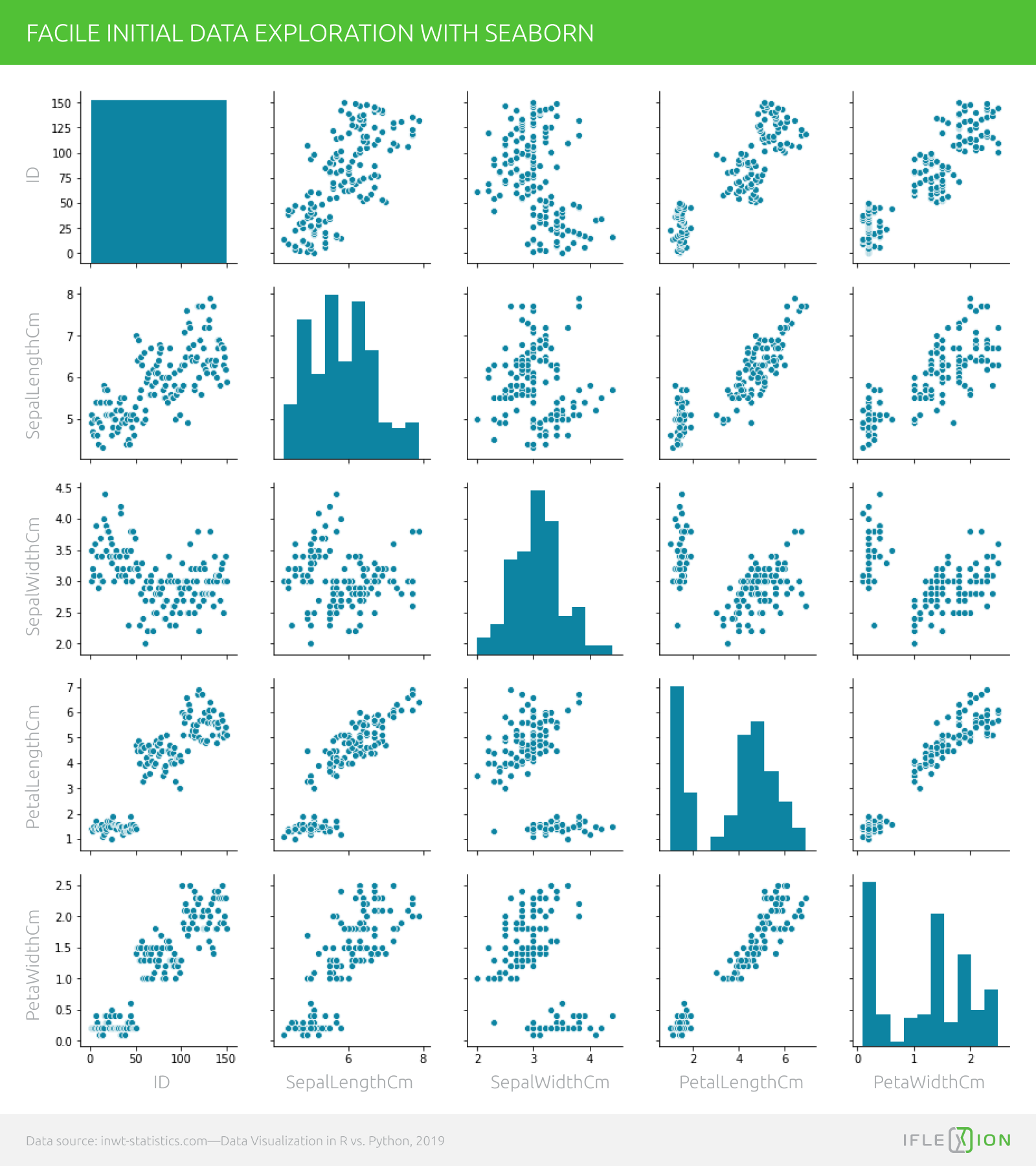 Animation is also catered for via the Animatplot library, an extension for Matplotlib, as well as being natively supported in Matplotlib itself44.

Plotly for R and Python

Canadian software company Plotly has developed various data visualization libraries for Python and R, including the Dash Python and R (DashR) frameworks for the creation of interactive dashboards and graphics. 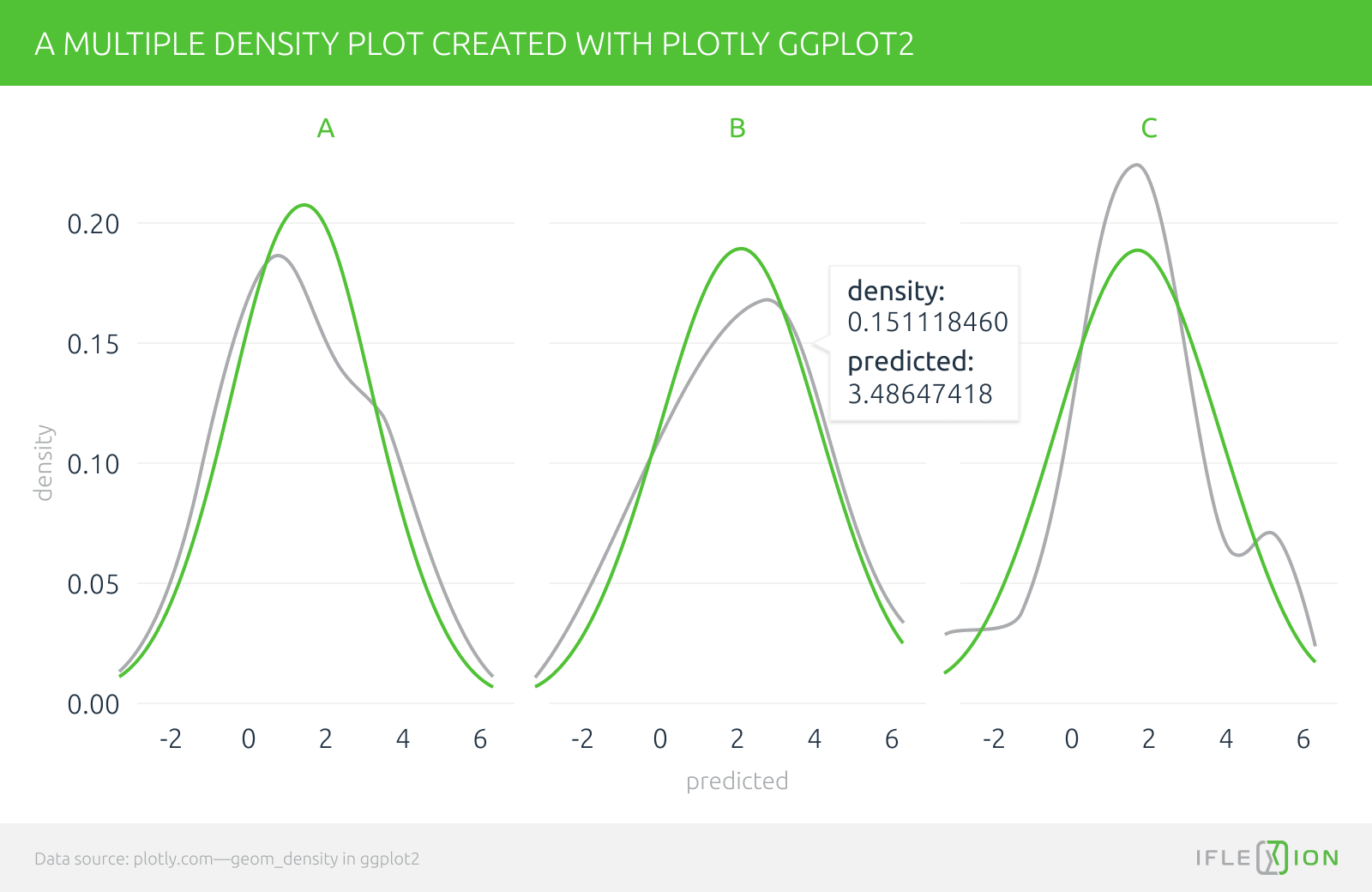 Implementations of Plotly are derived from the plotly.js JavaScript repository, which can output still or animated raster graphics in addition to resolution-independent vector-based SVG files, allowing for more sophisticated and interactive applications, such as PDF-style dynamic documents:

Trellis Graphs for R and Python

Trellis graphs45 visualize the relationship between any number of variables, represented as a rectangular array of plots (histograms, box, or scatter). 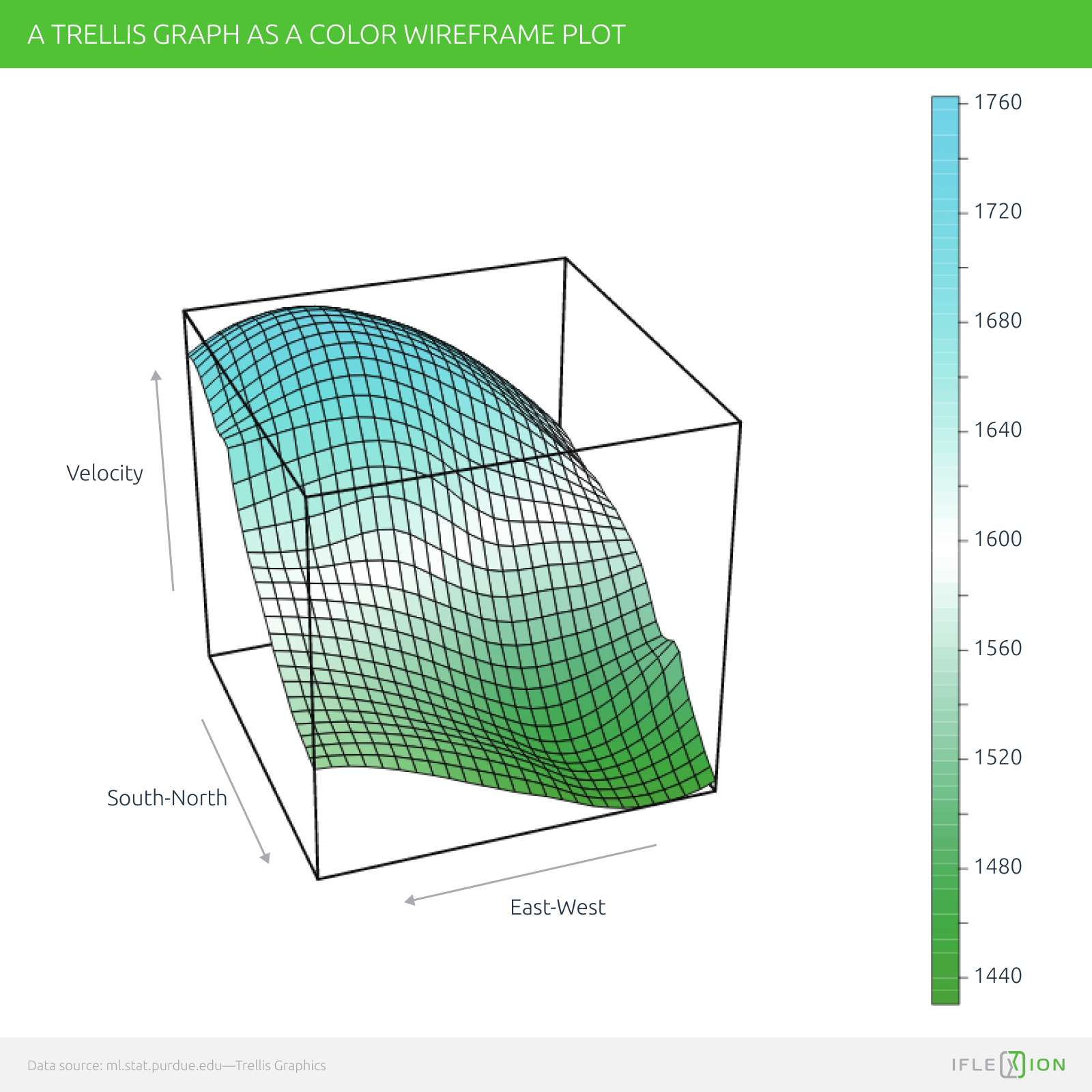 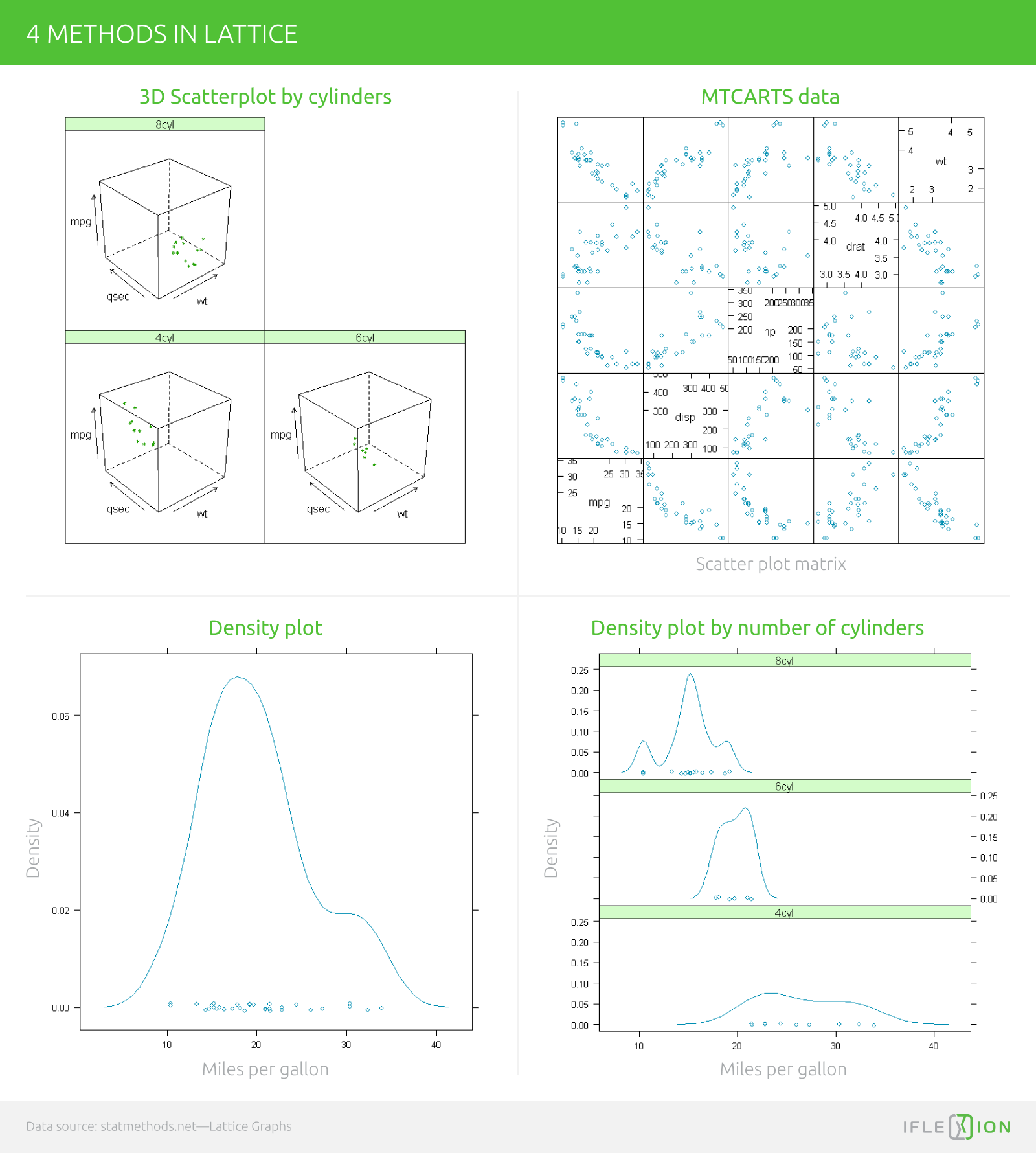 R's tight focus on local data science analysis means that all tooling and all help resources will be in some way pertinent to the task, whereas the signal-to-noise ratio of the Python ecostructure can be an initial obstacle when developing dependencies in a new framework.

However, it's generally acknowledged that R has a steeper initial learning curve than Python, and is less widely applicable to other environments.

Python's object-oriented approach is less specious than R and its learning curve shallower. Additionally, knowledge of other programming languages with a similar paradigm will speed the progress of a Python initiate substantially, but may be less useful when learning R.

In terms of code complexity, there is very little difference between R and Python49.

We saw earlier that Python is the most popular machine learning language. According to the Stack Overflow 2020 Developer Survey50, Python maintains its 2019 position as the fourth most popular general programming language among professional developers at a 41% share, while R drops one place to the 17th position with a 5.5% share.

However, it should be considered that R is a dedicated data science analysis language and Python a heterogeneous programming language with a wider scope, particularly in machine learning — a later consideration in the development of R.

Nonetheless the ascending trajectories of the two languages over ten years is a broad indicator of talent availability and market share in favor of Python: 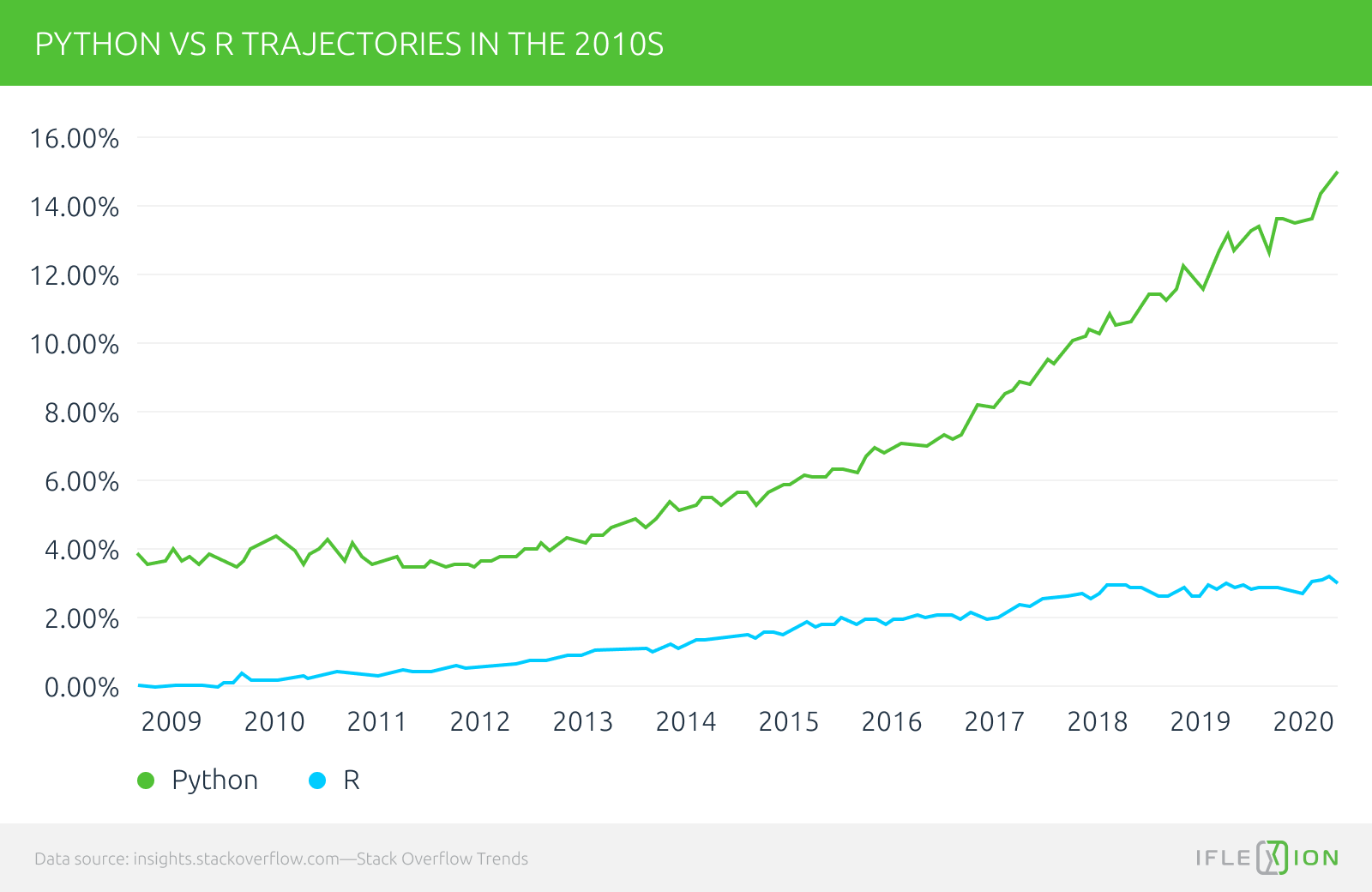 A recent Kaggle survey indicates51 that Python comfortably dominates R in terms of adoption for deep learning, covering the majority of work in computer vision and natural language processing (NLP), with a wider diffusion and uptake in the data science community.

Since, as we have seen, there is no notable shortfall in functionality for data science analysis between Python and R, there are only a limited number of convincing reasons to choose R:

Conversely, there are stronger indicators for choosing Python over R:

We began this article by considering whether Python or R might become an outmoded language in data science, or whether the two languages will maintain their current equilibrium. With feature parity between Python and R now a moot point, it can be argued that R will remain on the back foot, and is indeed becoming a 'legacy' approach when considered against the ascendancy of Python in data science analysis, and that R's specialization in this field is no longer a compelling reason to prefer it.

R's specialization in data science analysis is no longer a compelling reason to prefer it over Python.