Robots in the Entertainment Industry: What are They?

From the Middle Ages to the early 2020s, we trace the roots of entertainment robots and look at the technologies that make them possible.

Robots, in the popular sense of the term, have been serving as marketing devices for the best part of a thousand years. Though simple and semi-automated domestic machines hail back at least to the first century, the earliest known anthropomorphic robots enter history in the twelfth-century Arabia, when a precocious robotics genius developed an ingenious floating bandstand featuring programmable automata. These metallic musicians would apparently perform music at royal parties.

Though the current boom in AI development and the hardware kits needed for it has fueled a new wave of interest and investment in robotics over the last twenty years, relatively few of the really useful articulated robots resemble living beings, human or otherwise. This is because, in contrast with the laws of evolution, most robots are designed for a single purpose that tends to exclusively define their form.

For instance, bomb-disposal robots are usually some variation on a small-scale tank with a single arm, resembling no living creature, while the average tree-climbing robot, though somewhat insectoid, dispenses with any other anatomy besides what's needed for that single task.

Among the class of high-functioning robots that do share some core design with living things, many are to some extent repulsive, such as NASA's arachnoid RoboSimian and Boston Dynamics' buffalo-like WildCat.

The Appeal of Robot People and Animals

There is something fascinating for us in the notion of creating more amenable robot versions of ourselves and of the more human-friendly sector of the animal kingdom. Perhaps it's a wish for a greater level of control than we experience with their 'real' counterparts, or that a humanoid robot's relative cognitive and emotional simplicity appeals to our nurturing instincts.

Whatever drives the interest, an amicable human-like or animal-like robot can easily grab our attention — a valuable commodity.

Speak to our AI developers
about your next project.
Get in touch

In 1986, car manufacturer Honda embarked on a project to develop a truly humanoid robot capable of walking, running, lifting, and a gamut of human activities. Eventually dubbed 'Asimo' (in tribute to Isaac Asimov's invention of the three laws of robotics), the evolution of the robot lasted 22 years. It remains arguably the most human-like of any robot to date.

Estimated to cost 'tens of millions of dollars', the sophistication of Asimo's robotics technology achieved a halo effect for Honda's research corpus, even though the origins of the project are ascribed to the engineer-dominated culture at Honda, Japan's above-average love of robots, or deemed to be a morale-boosting exercise after an exhausting fight for the car manufacturing market share throughout the late 1970s and 1980s.

In recent years, MIT spin-off Boston Dynamics has picked up the mantle of the robot development company with the biggest 'wow' factor. In June of 2020, the Massachusetts-based company made its autonomous robot dog 'Spot' available to US buyers for $74,000.

Spot can climb any stairs that meet US building standards and move forward at a maximum 1.6 meters per second. He weighs about 72lb and comes with a customizable payload port and a software development kit. He can also be augmented with a range of accessories including LIDAR and an Enhanced Autonomy Package capable of extending the robot's autonomous mapping range from 4 to 100 meters.

In keeping with Asimov's first law of robotics, the impressive robot canine will only obey orders up to the point of causing harm to others or to itself, and comes with a developer API. 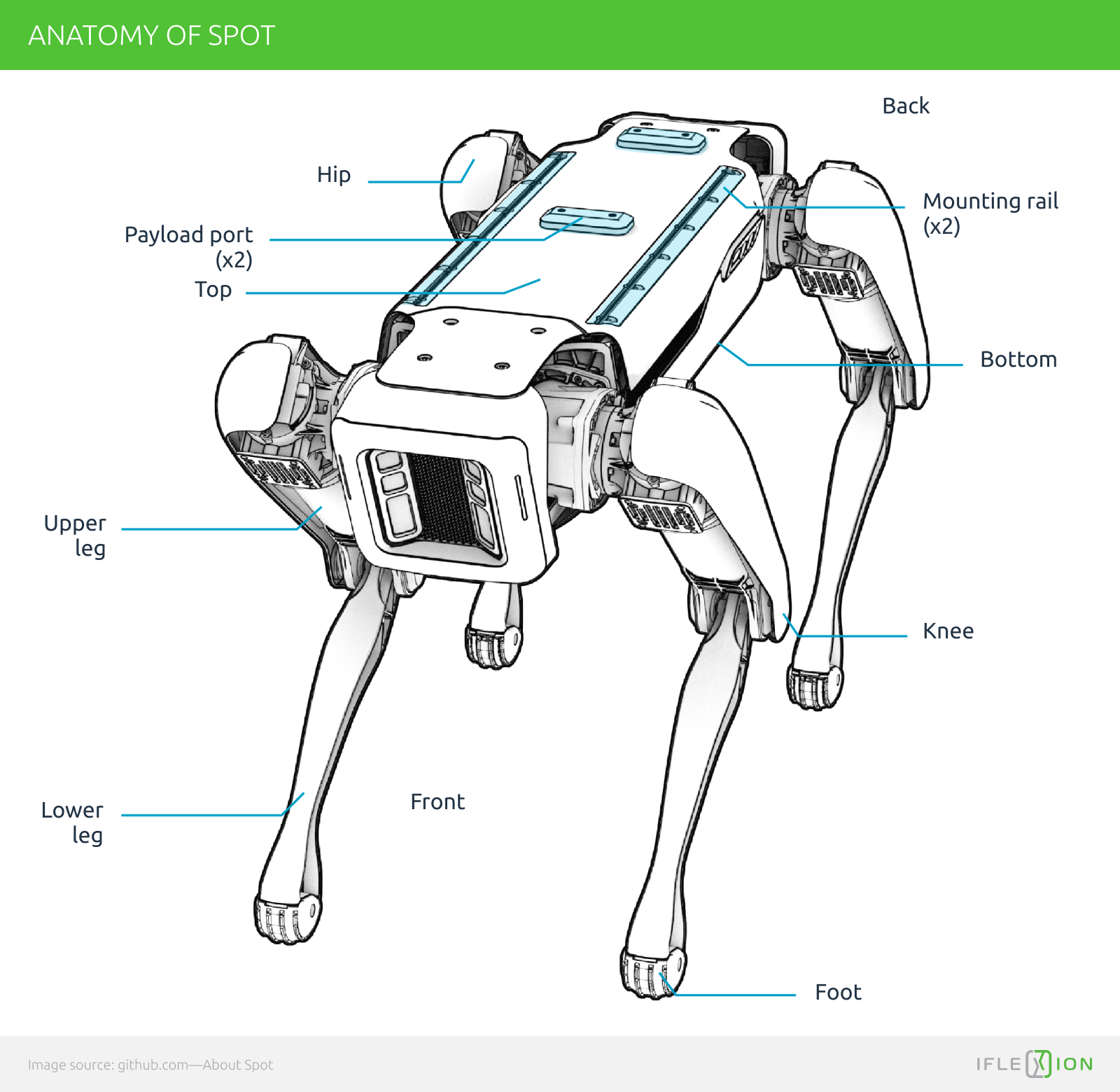 Spot is the first product that the 28-year-old company has directly commercialized, and is intended primarily as a roaming inspection tool or for applications in healthcare and entertainment.

From Asimo to Spot, there is a surge in multifunctional robots showcasing the latest in artificial intelligence.

However, Spot is a very expensive piece of hardware to set loose in a casual environment, and it could be argued that, along with stablemates such as WildCat and Asimo successor Atlas, Spot's main purpose is to bring in new bespoke development business to Boston Dynamics and to generally publicize its range of services — not least to the military.

The US military, always a heavy investor in robotics, is set to spend $16.5 billion annually on robotics projects by 2025 (Statista) in the context of the forecast $102.5 billion total value for the global robotics service market (ResearchAndMarkets).

With spending power that's more or less ring-fenced against government cuts and recessions, military contracts have an edge over the volatile private sector, and are a powerful motivation for robotics developers.

However, lucrative military robotics contracts bring with them an ethical shadow that seems to have convinced Google's parent company, Alphabet, to sell Boston Dynamics to the investment arm of Japan's SoftBank in 2017, along with the lesser known Schaft robotics development company. By this stage, the company had gathered notable public interest through videos of its various prototype military robots.

In a debut similar to the floating robot band from the twelfth-century Arabia, car manufacturer Toyota launched its robotics venture in 2005 with an all-robot musical band at the 2005 World EXPO in Japan. Themed similarly to Asimo, the 'partner robots' played the trumpet and drums, and were to evolve in capabilities and appearance over the following 15 years.

Over the years, the central mission for the Partner Robots has shifted from any pretense of autonomy into the sophisticated remote presence systems. Impressive as it is, the T-HR3 scarcely qualifies as a 'robot' in the traditional sense, but rather acts as a remote exoskeleton for human operators.

Since its inception in 2004, the Partner Robot program was designed to cater, unsurprisingly, to factory production, but also to develop technologies for elder care mobility issues. Once again, the 'entertainment robots' that launched the initiative were loss-leaders for more serious intent and market ambitions.

Besides proprietorship of Boston Dynamics, SoftBank also produces one of the most famous entertainment robots of the last six years. At four feet tall, Pepper weighs 62lb and is designed to charm.

The robot has tactile sensors on its arms, chest and head, and features facial recognition, movement detection, a customizable voice, a range of ultrasound and laser sensors, the capacity to learn to recognize new objects, and a sentiment analysis system to gauge your mood based on your vocal patterns.

At an average sale price of $38,500, Pepper is about half the price of the Spot robot dog, with many more case studies and active engagements to its name.

Though Pepper is doubtlessly a promotional robot, it is also a viable product in its own right. Since its launch in 2015, the engaging android has sold over 12,000 units addressing a range of sectors and activities, such as a dancing entertainment device at a Palo Alto store, taking customers' orders at Pizza Hut in Singapore, serving ice-cream in Australia, and even fighting coronavirus with a roving public information service in Japan.

Besides Pepper's service as an educational aide in classrooms, the robot comes with a flexible API, making it a useful system for robotics researchers.

Priced at around 20 million yen ($188,000+), this android from Japan's National Institute of Advanced Industrial Science Technology (AIST) caused a sensation when first launched in 2009.

HRP-4C, aka 'Miim', has the official average dimensions of a Japanese woman, is 5.2 feet tall, and weighs 95lb. Eight motors in Miim's face allows for a limited range of expressions, while 30 body motors permit her to walk at an average human speed.

Miim was conceived with relatability in mind: the robot's creators prioritized a 'human-style' walk with all its redundant biological quirks instead of engineering the device to achieve a more optimal walk, which might have proved disconcerting in this context. 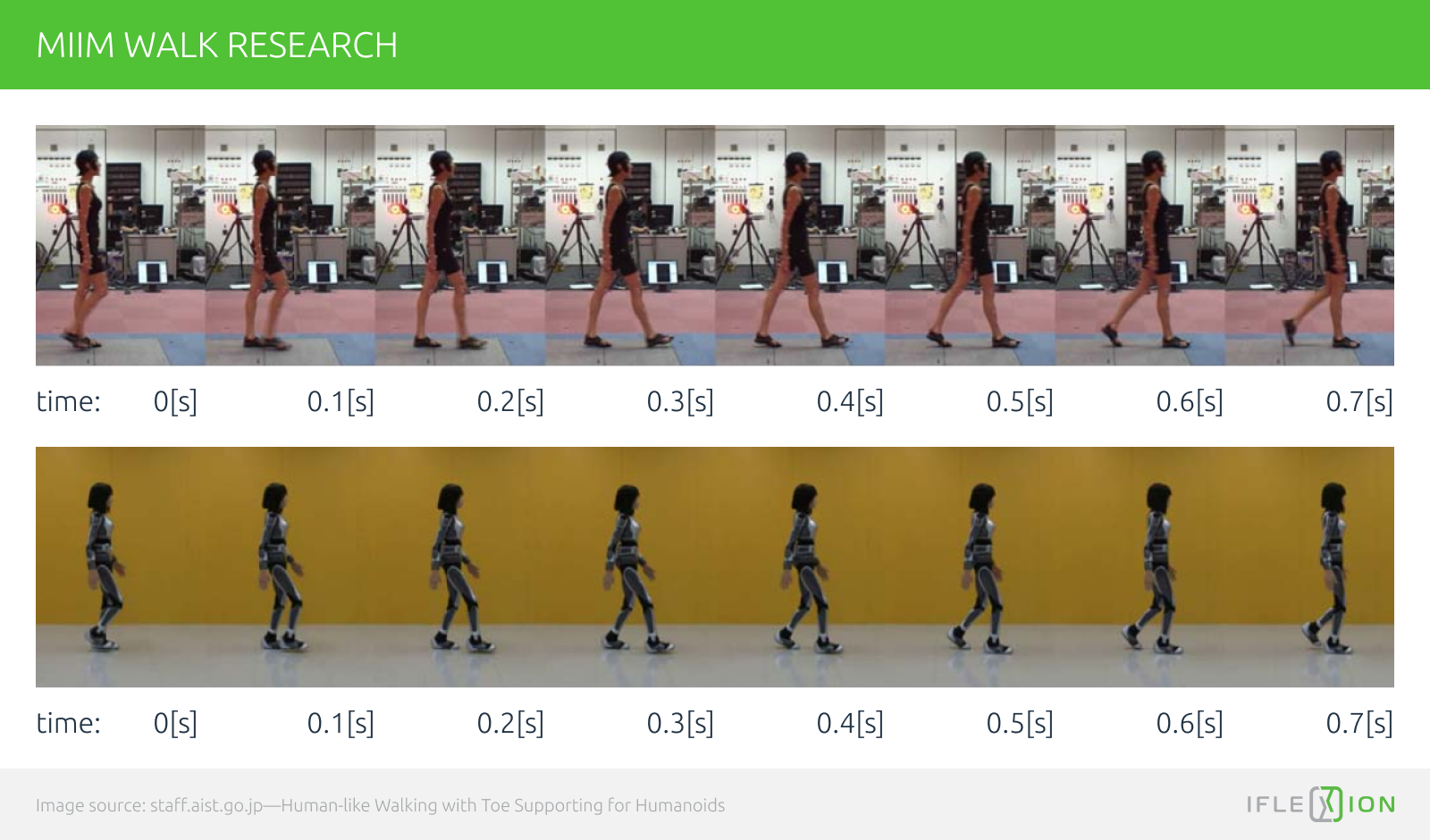 Despite her captivating appearance and general duties as an entertainment device, Miim was also conceived for '3D work' (Dirty, Dangerous and Demanding), as well as for research and development purposes.

By 1998, a new fever had broken out among electronic and car manufacturers to showcase their development and fabrication capabilities via attention-grabbing robots. Sony got into the game with the 1999 launch of Aibo ('pal' in Japanese), a line of robot dogs that captured the public imagination until its discontinuation in 2006.

In 2017, Sony revived the Aibo brand with the new ERS-1000 model, boasting a 64-bit Quad-Core processor, a battery life of two hours, and 19 separate axes of movement. The robot costs $3,000 and is capable of learning 'tricks'.

The new Aibo's facial recognition system can store up to 100 faces and respond to more than fifty voice commands. Since the unit's AI model is trained in the cloud, the ERS-100 requires a permanent internet connection. 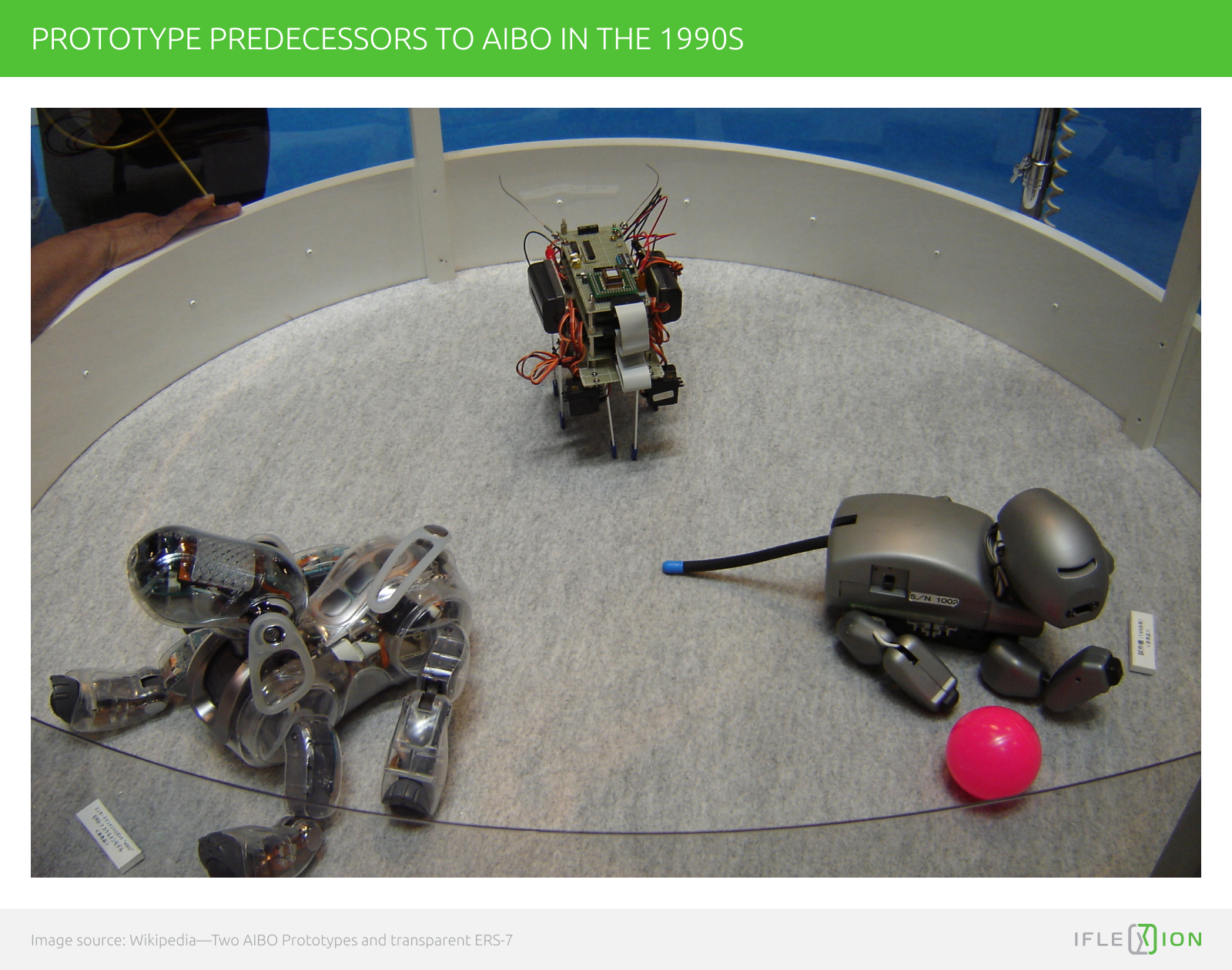 Featuring 60 different facial expressions, Sophia is the culmination of a series of robot projects undertaken by Hong Kong-based Hanson Robotics.

The six-foot tall machine, whose name means 'wisdom' yet who pledged to "destroy humans" in an early appearance, may be the most successful marketing or entertainment robot yet created.

Sophia is the first 'artificial being' to address the United Nations and to be given citizenship of a country. The life-like robot, featuring AI-powered walking and talking skills, has also been featured in dozens of major publications and feted on a long chat-show tour in the west.

Although some privileged press reporting contends that Sophia's facial and emotional recognition capabilities are powered by neural networks, and that the robot's functionality qualifies as a rudimentary Artificial General Intelligence (AGI), Facebook's director of artificial intelligence likened Sophia to the title character in The Wizard Of Oz — an impressive charade, but with little integrated power or autonomy. Even the robot's creator estimates her development at the level of a baby or toddler.

Though Sophia's schedule as an ambassador, marketing beacon and academic research tool means that she cannot be purchased directly, Hanson has released a programmable 14-inch 'little sister' related to the product. Described as an 'educational companion' and set for delayed release in 2020, Little Sophia will cost between $99-149.

Trace the timeline of viral entertainment robots on the market over the past two decades.

Since nothing gathers journalists, tech investors, and consumers together faster than a new anthropomorphic or zoomorphic robot, there have been more in circulation in the last ten years than we're able to cover in detail here; but here are some more of the most notable.

Mitsubishi's diminutive communications robot generated considerable press interest in 2015. Like many robots featured here, Wakamaru was envisioned as an educational and elderly people's aid, yet ended up primarily as a popular spokesperson at tech events. However, with a $14-15,000 price tag, Wakamaru's simple speech skills and limited articulation failed to capture the market.

In the early 2000s, Japanese electronics manufacturer Fujitsu made a foray into robotic PR with a versatile and well-articulated miniature robot series called HOAP (Humanoid for Open Architecture Platform). Powered by Linux, the 1ft 7" robot was marketed as a research tool and featured grasp force sensors, speech recognition and synthesis, and image recognition.

Not to be left out of Japan's robot wars, Tokyo electronics giant NEC produces one of the best-loved robotic personages of the last twenty years. If there's no-one around, PaPeRo (Partner-type-Personal-Robot) will go looking for people to fuel its embedded system of facial recognition, avoiding objects in its way with ultrasound. With an appealing visage, the 1ft 2" robot has attracted a number of imitators, even if its vocation as a receptionist and elder-care system has trailed off in recent years.

Robots that are designed to appeal to us and to meet us on near-equal terms in our own physical space have a tremendous psychological advantage over abstract chatbots and other more practical and direct methods of communicating with AI. They are, to boot, born ambassadors.

Even if robots are difficult and expensive to create, the new boom in machine learning, NLP, computer vision software, and other robotics-related technologies ensure that we'll be meeting more strange creations in the halls of tech expos in the years ahead.