Music App Development for a US Audio Streaming Service

Mobile and backend development, testing and support for Build Your Own Channel, a music streaming app for users to create and share their personal music channels.

Our Customer, BYO Network, is the owner of the audio streaming service Build Your Own Channel (BYO Channel) with 40+ million tracks by 4+ million artists, enabling users to listen to others’ music channels as well as build their own.

Four years into developing the service, the company had to continuously switch software development vendors until they onboarded Iflexion’s team of mobile developers. Our goal for this project was to take up the music streaming app development, add new features, and stabilize the existing functionality of the iOS and Android apps.

During this year-and-a-half engagement, Iflexion’s team revisited the iOS and Android applications in the BYO Channel suite, to provide their users with an improved experience of collecting and sharing their favorite tracks on the go, with the ability to create channels, personalize their design, and add new songs.

Users can search BYO’s vast collection by tracks, artists, albums, lyrics, and other users. They can also sort and filter tracks, listen to a short track sample right on the search results page, add tracks to their new and existing channels, and add tracks to favorites.

Search results are shown as a list from where users can access the artist’s page, album page, or a user’s profile page. Users can visit each other’s pages and view the channels created by them.

Users can add tracks to their channels, name channels, add descriptions and tags, as well as set cover images. Each channel can be published as public or private.

The channel player suggests several algorithms that can be set up for a channel, with the chosen algorithm adjusting to the tracks added. Depending on the tracks, the algorithm sets up playback according to its specified parameters. In the channel player interface, users can manage the channel, play it in Chromecast, and share it on social networks.

This trademark feature allows users to record and edit their own voice tracks, which can be then added to existing or new channels. The feature is available by subscription only and comes in three editions−basic, premium, and X.

There are three types of in-app ads, shown or played to users unless disabled through a commercial-free subscription:

Well-versed in mobile app development, Iflexion ramped up a team flexible enough to respond to continuously changing tasks and project priorities. In total, the team consisted of iOS and Android developers, backend PHP developers, business analysts, administrators, a project manager, as well as QA and security testing experts to ensure the apps were well-protected and had no vulnerabilities.

As our team inherited the project from past vendors, we revisited the scope of the music app development, analyzed the underlying code, and decided on the elements that could still be reused as well as the ones that had to be rewritten from scratch. This stage was followed by fast-paced Agile development, which lasted for a year before we released the apps to production and started the stabilization stage.

In the course of this music app development, Iflexion’s team addressed a few non-trivial challenges rooted in the nature of this project:

Within the framework of music streaming app development and implementation, our team integrated the solution with the following third-party tools:

Our team used the following libraries:

Our developers built the local track playback as a custom component, using the native Android SDK tools. For the Android music app development specifically, we used the following libraries:

The pinnacle of the project was the migration of the solution backend from BYO Network’s servers to Amazon Web Services (AWS). In the course of the migration, we utilized the following technologies: 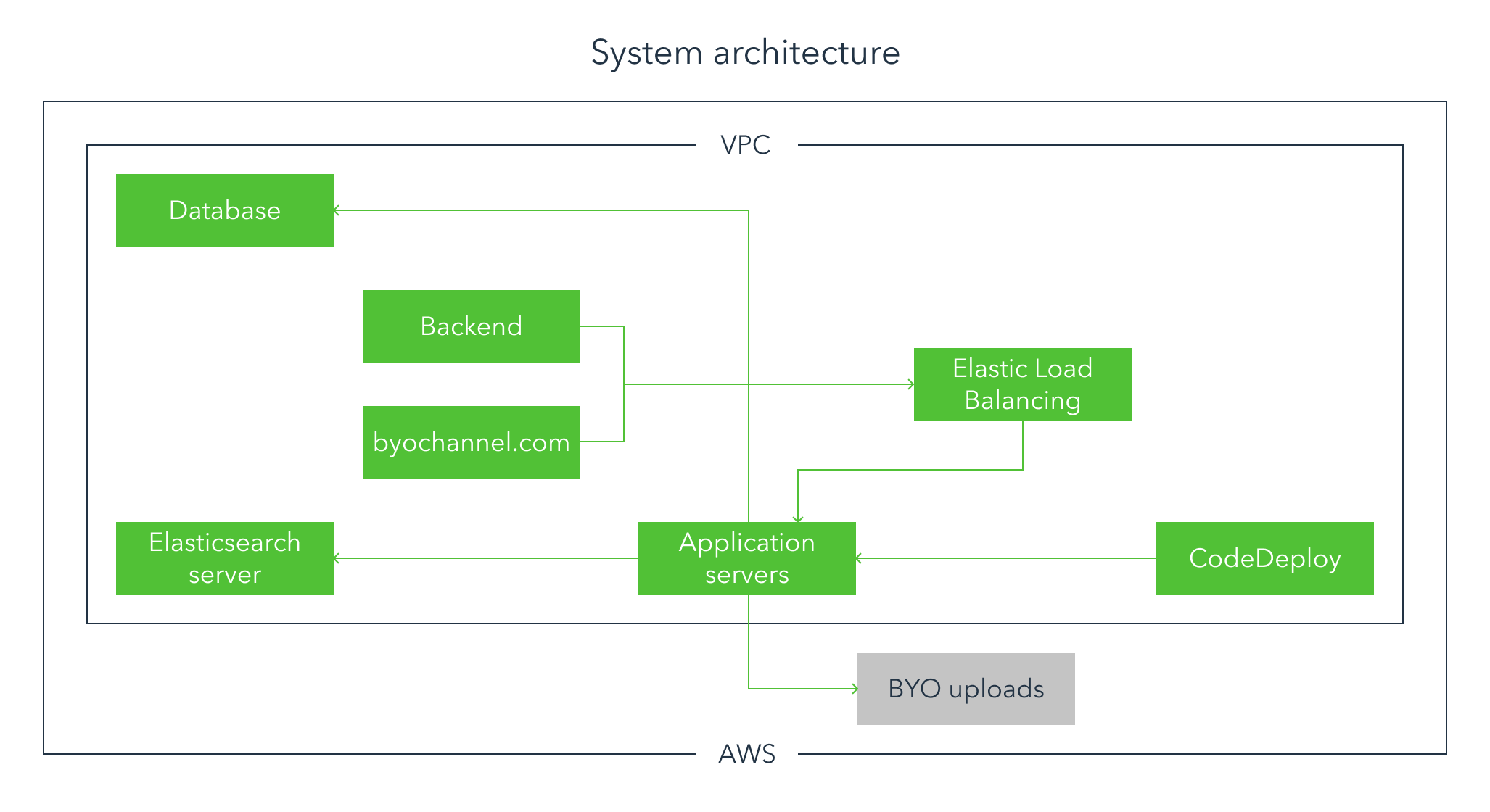 Iflexion’s mobile developers were instrumental in bringing BYO Channel apps to the market, stabilizing the features developed before us and adding new ones. The resulting suite of mobile music streaming apps is now available to users to create and manage their channels with flexible subscription options.

Iflexion continuously provides maintenance and support on this project, monitoring the server and the environment, responding promptly to requests, and delivering regular detailed reports on the app updates.

Iflexion helped the customer build and launch an innovative crowdfunding platform for individual and commercial projects.